What have you done to your P5 today?

pcb said:
Yeah, Michigan is pretty salty.
You may have the only P5 still in Michigan, certainly the only rust free one.
Click to expand...

That would be pretty sweet

Tonight I polished my headlights.

For safety, of course… 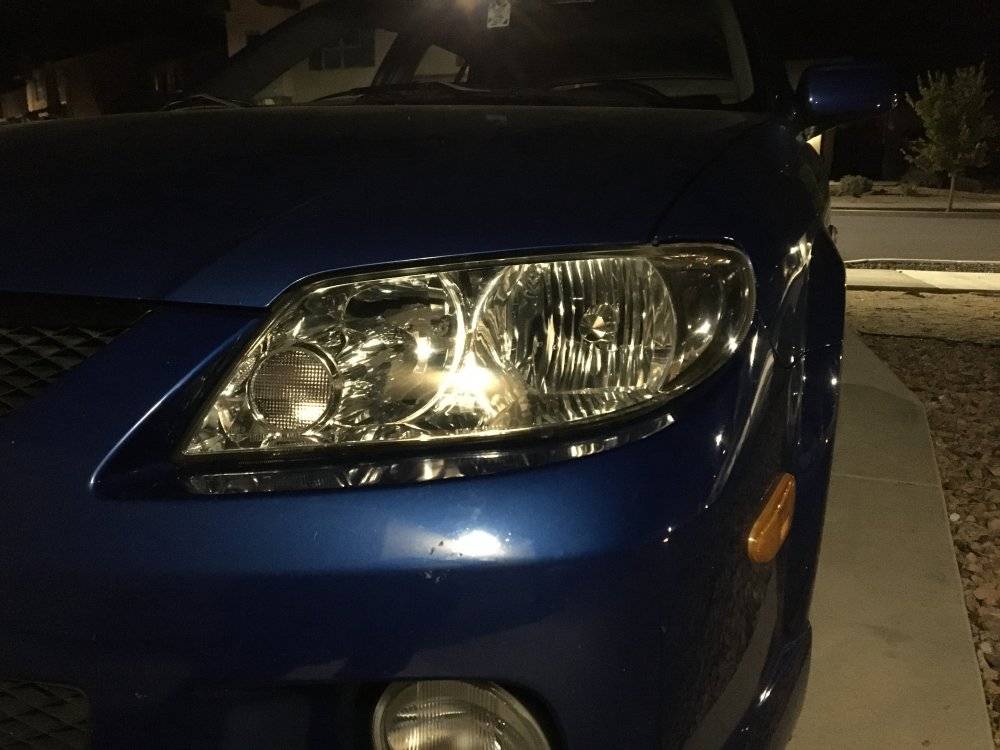 This morning I wrote “engine mounts” on my to-do list after feeling movement through the stick during acceleration. 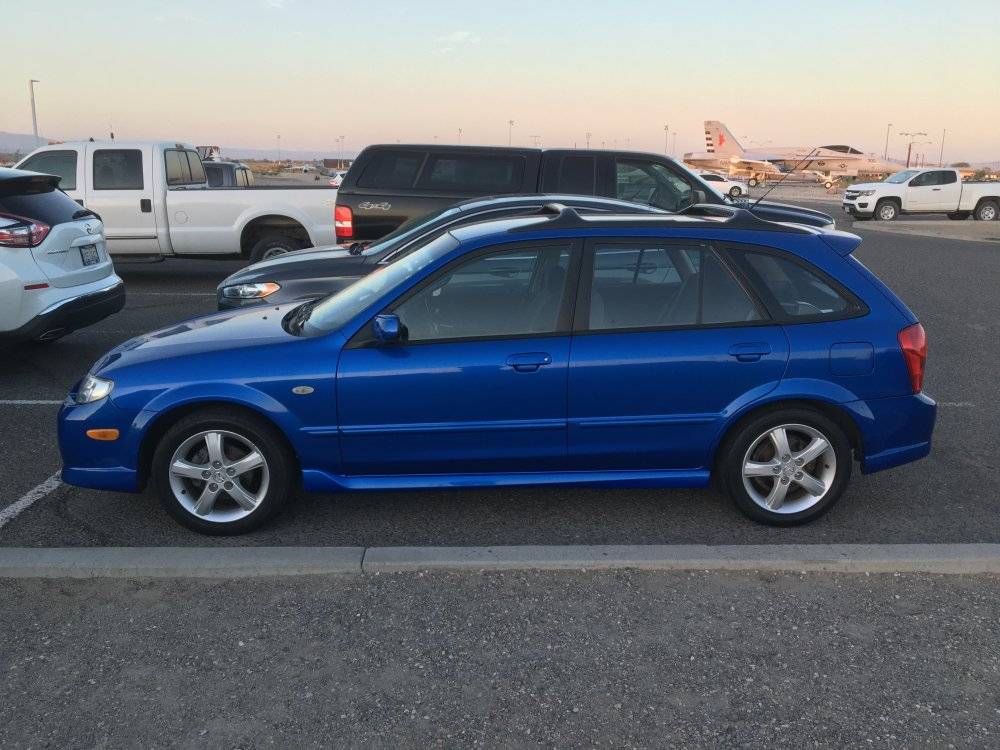 Meck said:
This morning I wrote “engine mounts” on my to-do list after feeling movement through the stick during acceleration
Click to expand...

I recently replaced the passenger and front motor mounts (both were completely torn) but the transmission and rear mounts looked intact.

I used the AWR poly mount for the front and I'm really happy with the performance and low vibrations. NOTE: when you purchase the passenger mount or the mount kit (with all 4), just make sure you get the one that has the stabilizer arm pressed in already. It's the part that attaches to the passenger frame rail (p/n A6481). Also, the bolts for the passenger mount cost me about $350 because the first bolt broke my 3/8" deep socket so I had to buy a DeWalt impact + impact deep socket kit.
P

Meck said:
This morning I wrote “engine mounts” on my to-do list after feeling movement through the stick during acceleration.
Click to expand...

reut1 said:
Seeing this thing makes me so sad for the exterior condition of my laser blue p5
Click to expand...

I was lucky to get a garaged California car.

Meck said:
I’m in Nevada. I’ll definitely look into it before moving back to Michigan.
Click to expand...

Where to (roughly) in MI? I'm in the SE DetMet area. I had a NC Pro5 which succumbed to me being a plonker, but had some rust starting in the rear arch, and have a TX Pro5 that has been resprayed poorly, but lacks rust (thankfully) so there's that...

Enjoy the car! I know I have, as I've owned one in some form or another for coming up on 10 years
R

Meck said:
I was lucky to get a garaged California car.
Click to expand...

That is how my miata is, but protege was a rust free NJ car when I got it in 2009. Then I daily drove it here in CT, never garaged. It'll tell me when it is time to say goodbye

Today I took some pictures 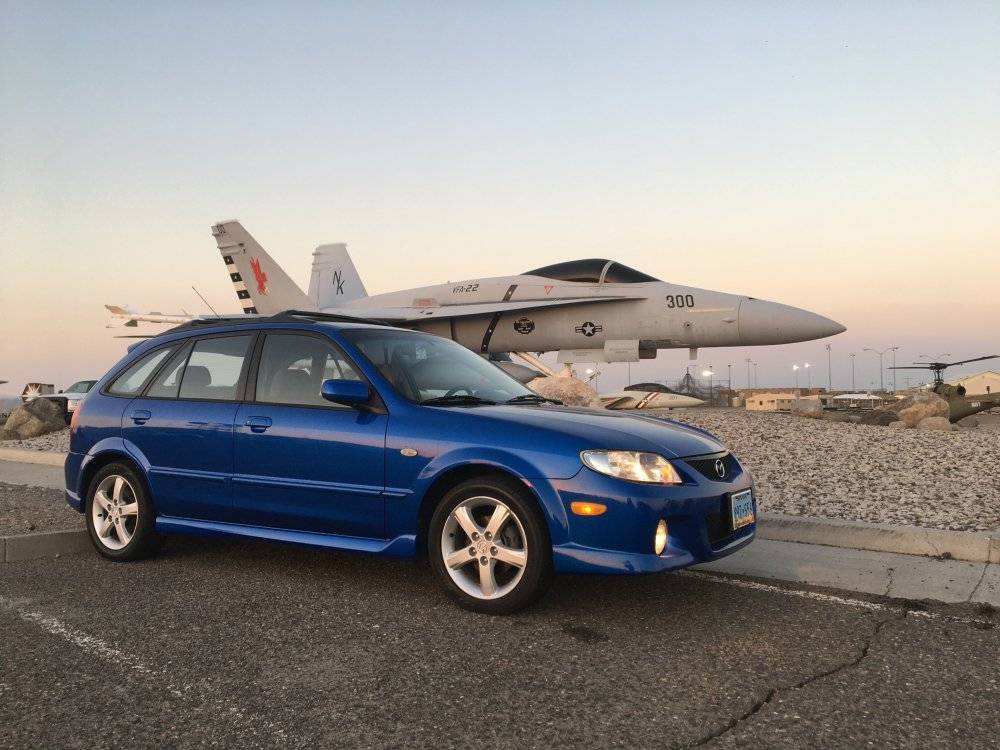 The pics didn't turn out well but I got out the cleaning things to get the drivers seat cleaned and extracted, came out pretty well but I am gonna have to actually remove both of the fronts to get at them 100%, got the floor mats cleaned too but still getting dirt out of them after three passes with the extractor. Pulled the right front door panel to diag the speaker and found it was an aftermarket that couldn't handle moisture, the paper part of the voice coil warped up and seized it in the magnet.
T

pcb said:
My car is 20 years old this month.

Yeah, I might qualify for classic car insurance now, but I think that I can only drive to and from car shows and only during the day ?
R

Who likes the compartment where the jack goes on my p5! Or my passenger front fender 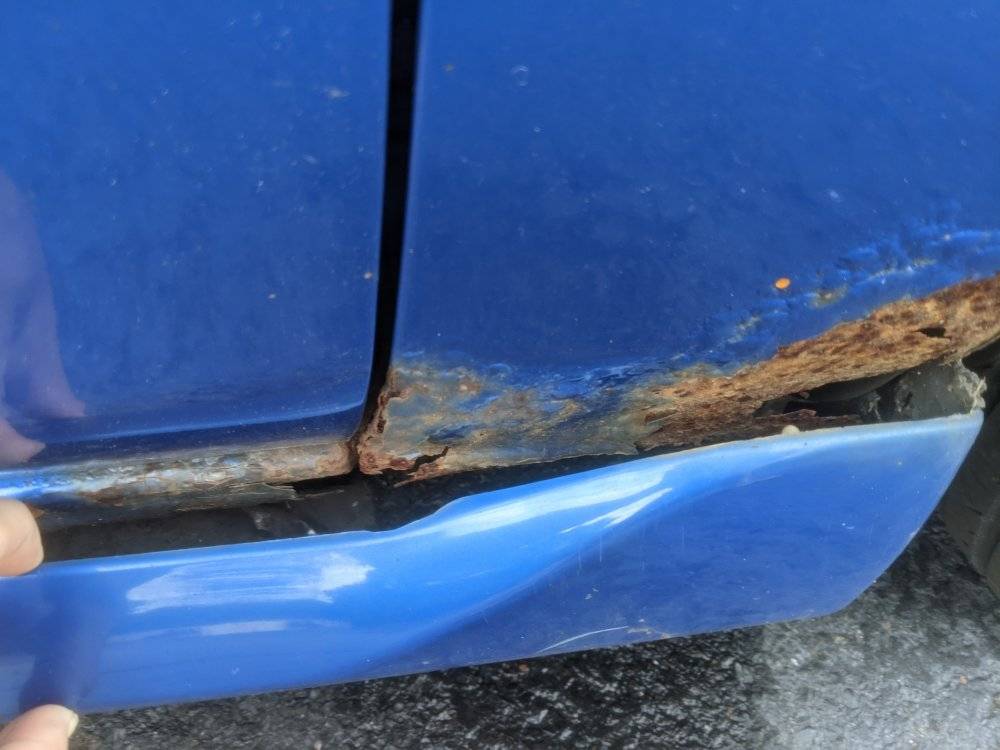 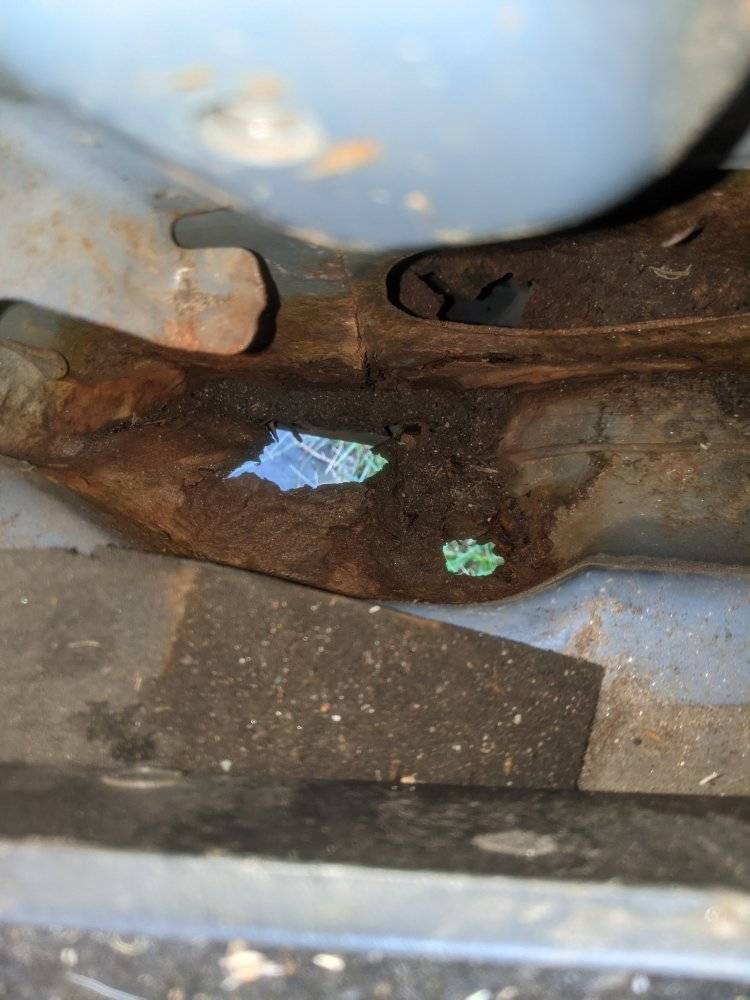 You should hose the area down with something like this... 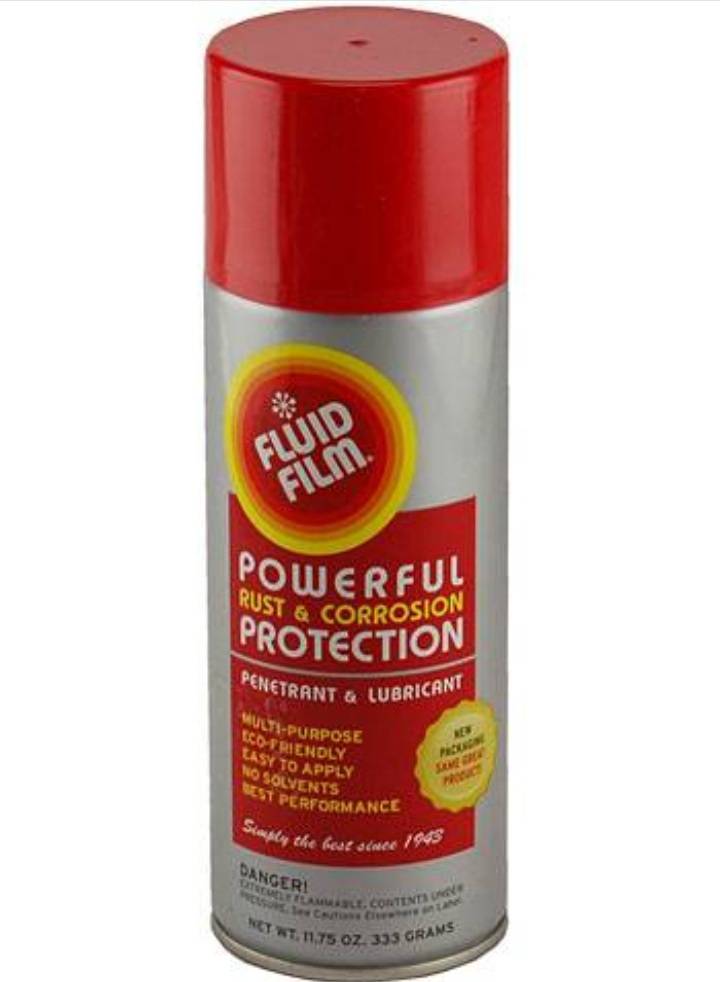 
Consider taking it in for a proper undercoating, even if just once.


Keep your car going as long as possible.

My gas tank rusted through, so I replaced it.

It was still worth the time, effort and money.

My frame is reasonably solid.

My other side rusted through in the same way as your car.
I stuffed an oil soaked rag into the area.
It sealed the hole, slowed the rust, and stopped any exhaust from getting in.
Last edited: Sep 27, 2021
P

These are my floorboards... 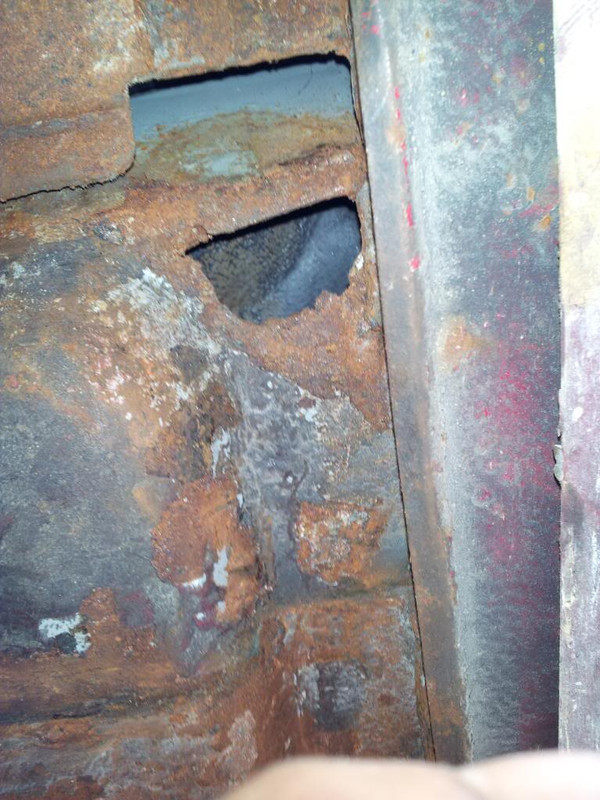 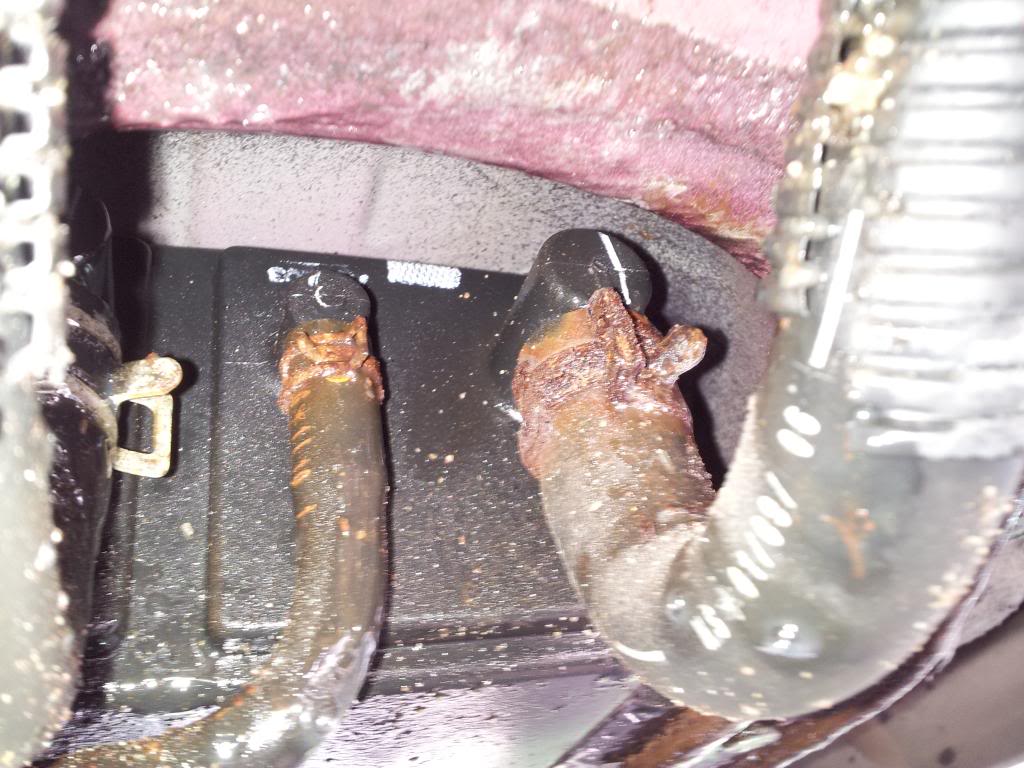 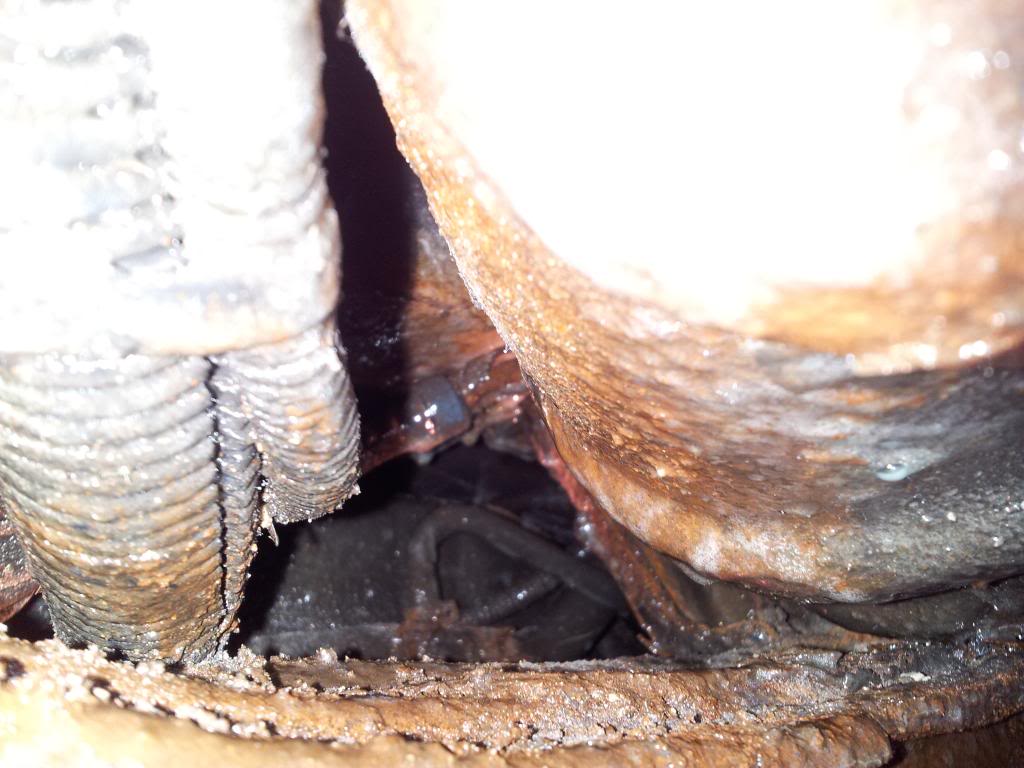 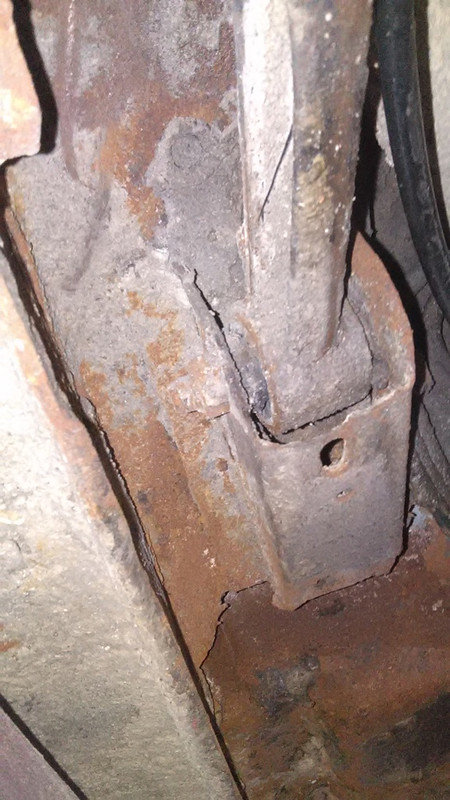 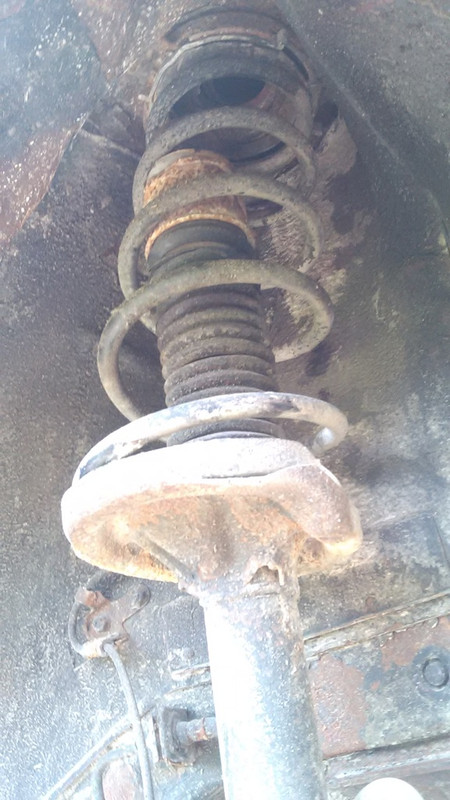 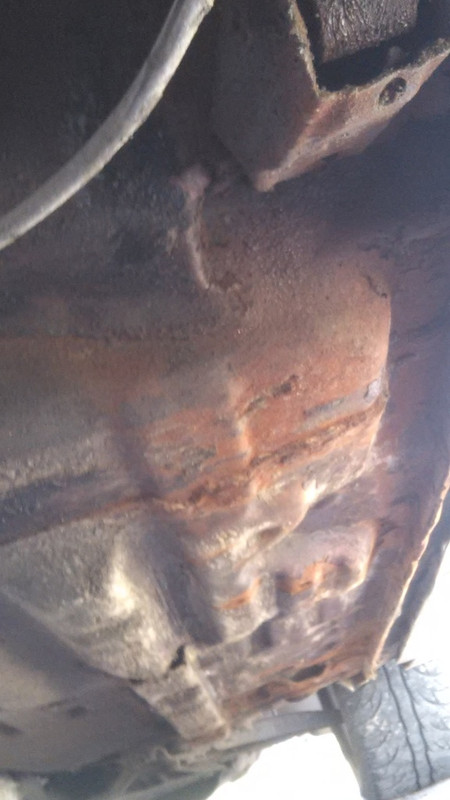 And every other P5 around her that is still alive... 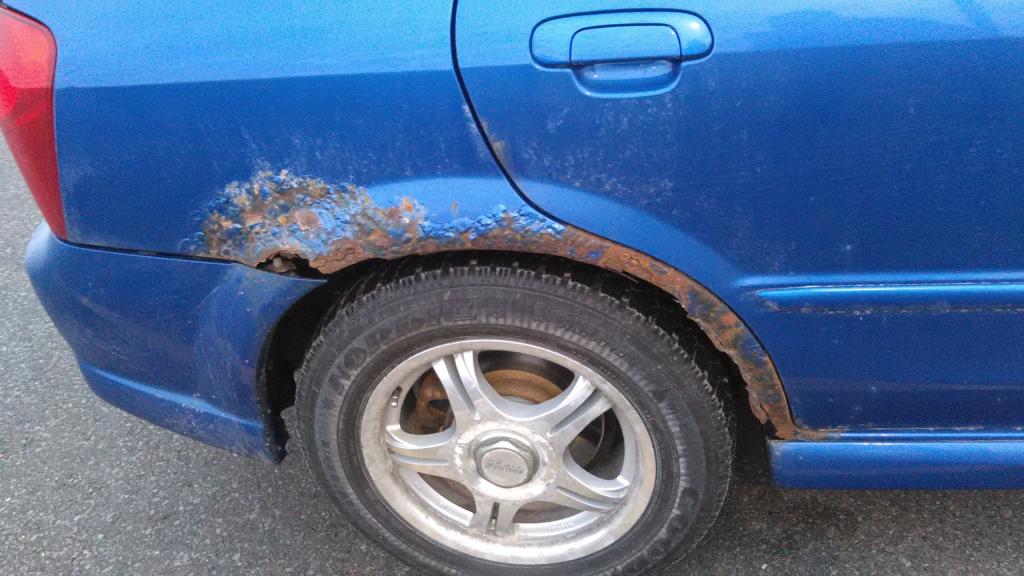 It's messy, but it works.
P

I Bought A Gallon Of Rust-Proofing

I especially enjoy the bit where it says "asbestos free."

Nothing screams "there was once a better product than removal of something particularly hazardous for ones' health!

Now if Mazda could have made the decision to use metals not sourced from the Titanic, that would be swell!

On the rust-related note, I figured I'd share my anecdotal background on paint and rustproofing, being that I (for better or worse) work at a company that builds paintshops.

TL;DR for below: paint, and the processes involved are kind of complicated, and have improved quite a bit in the past 20 years. I'll shed light from my brief time in the industry thus far, because I like writing walls of text.

Much of the protection to the sheetmetal on a vehicle probably comes from the metal choice (I'm spitballing at this one, but I imagine there are some metals out there that are subpar in terms of their ability to resist corrosion). Also,DRAIN HOLESare pretty important too. See below to hopefully glean why that is. Barring these engineering decisions, we can apply coatings to metal to prevent them from succumbing to the elements (paint! and other things, too)

Where we come into play is regarding the pretreatment-ecoat machines, ovens, sealer systems, and eventually paint and possibly cavity wax systems.

Removing the grease from the metal as it comes in from body weld or whatever colloquialism denotes the assembly of the body-in-white is pretty important, as that will affect the ability of the ecoat to adhere to the vehicle. Being that the rockers, interior panels, etc., are pretty tucked away, it can be somewhat difficult to clear these areas off if a system isn't designed right. Think car wash but with more jets, which blast degreasers, aimed in particularly strategic manners, into and onto the vehicle. Prior to the ecoat stage, the body is hopefully cleared off/out of the degreasers, as ecoat material is far from cheap, and minimising carryover is important. This isn't rocket science, but it's got a decent impact on the effectiveness of things down the line. Building blocks and all that. If the individual(s) setting up and monitoring this system are lax, and the customer reps for [OEMs, Mazda, whoever] aren't privvy to what's ideal, then that will affect the next processes (this is common in every step, mind you)

Next comes the ecoat-deposition (ED - not that kind, or e-coat) where this paint bath is electrically coated onto the vehicle body. I'd like to liken it to a waterborne powdercoat in the simplest of terms, but I'm not sure that's fair to the ecoat suppliers as they have to carefully monitor the chemical balances and all that jazz. The same assumptions are made here; old systems involve tanks where the vehicle is conveyed through, into, and out of, and there are spray nozzles that are carefully aimed to, again, cover as much of the vehicle body as possible both inside and out. New systems improve on the coverage, but are obviously more complex. Adequate coverage does a decent enough job of protecting the metal (now underneath this coat) from rusting, however this material isn't UV-tolerant (which is where paint comes into play)

But before paint is applied, sealer materials are applied, and before THEY are applied, the car takes a trip through its first oven of the paintshop. Just like there's a perfect spot for baking cookies, there's a perfect spot for baking a car, and since all the metal is of varying thicknesses, it's a bit trickier than "turn up the heat!" Of course, the ideal cookie is subjective in terms of its "perfection," whereas the ecoat has a specific temperature curve, and bake time, to achieve. in order to be considered "perfect." You can't go willy-nilly blasing the car with heat, which would make things easy, if a little smokey. Assuming this is ideally done, you'll have an ecoat that's baked onto the vehicle well, has adequate scratch resistance (among other criteria) and from there the vehicle will make its way to the sealer areas.

Assuming you've seen some of the seam sealer areas, at the bottoms of the doors, bootlid, hood, scattered throughout the engine bay and other places on the cars, it can sometimes look a right mess, and other times looks very carefully applied. This is due to partial automation of these processes. Humans have more dexterity than robots, which ensures these overlords won't smite us entirely, yet. Obviously humans program the robots, so subjectivity comes into play here, where some seams may not be deemed as important as others, so this could lead to water sitting on these seams and we know what happens from there. Hem flanges are fun, because you've got to coat the outside of this joint, but the inside of the joint (inside the door cavity) is hard to get to. More on prevention of moisture into this area shortly.

Then the vehicle may go through another oven on its way to the spraybooths, or it doesn't. That is up to the supplier of the sealer material and paint. But we'll assume the concepts are the same in all of the ovens from here on out: bake at the right time/temp/rate, and things are happy. Fall outside this window and there are concerns that the material (whatever it may be) won't adhere well, will flake, will be too soft, will not have the appearance desired, etc. Whereas paints for household consumption are able to be applied at a wide-ish range, automotive OEM paints are picky, and are best applied within a thin window of temperature and humidity.

Paint is paint, and protects the ecoat material from being deteriorated by the UV light of the sun. There's film build to worry about here (Mazda is conservative on thickness here, but think about the saving$ (not being rude, but there's a lot to be saved with thinner film build - fewer filter changeouts, lower energy consumption of fans through running lower volumes, and less material consumed, for example))

Then eventually the vehicle makes its way to cavity wax (at least in modern systems) where it gets sprayed or injected with the wonderful stuff that repels water. If you've seen new cars, and looked at the holes that are at the bottoms of the doors for example, it's a clear film (like the wonderful Fluid Film, or SEM cavity wax) that should hopefully repel water from finding its unwelcome home in the depths of our cars.

Which, is the most long-winded, but hopefully informative way to say, @pcb is most definitely right to suggest FF or similar alternatives to slow the continuation of corrosion of our coveted cars. Also why POR-15 and other paints suggest adequate degreasing prior to application - for good adhesion.

Hopefully this helps shed light on why some cars might rust while others seem to last forever.
P

Life in the salt belt.
It sucks. 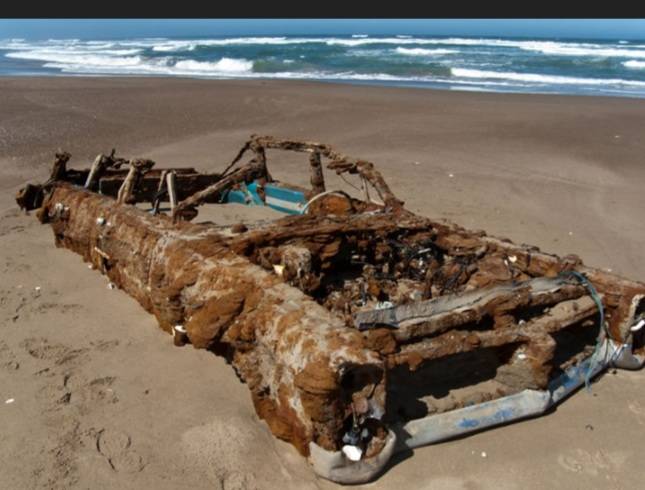 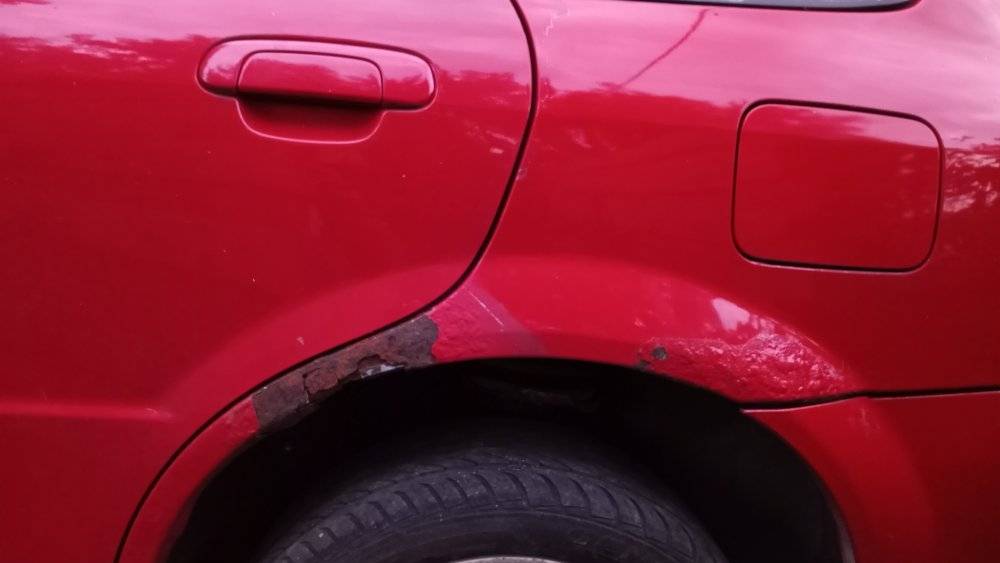 What have you done to your Mazda6 today?

What have you done to your Garage today?