What have you done to your Miata today?

No, I bought a new updated tank from Mazda. Lot cheaper than the moroso
R

Competed in autox today, finished second in my class. Very happy with the new setup. Still trying to find the limits of the new grip.

Yes much cheaper but that 'bling' factor is worth it (says the guy who just took most of the 'bling' out of his bay).

Nice! Especially since you are still testing those grip limits. Might just have a first place finish in your near future.
R

Thanks Jeff but I doubt lol.

Started stripping off the old plastidip in certain areas. Big PITA as it's be in for years. What to use the new stuff Jeff was using. Also ordered some remover from dip your car which I will use on the roof and rear deck lid and then respray with the new stuff.

Got the plastidip off the mirrors and door handles and some of the window frame. Also cleaned the engine bay, although not to Mark standards, but it will do for me.

Off to another autox tomorrow
R

So I found that the cooling fan motor is not working properly. Seems to not work on the low speed. I'll need to do some testing this weekend to make sure that it is a fan issue.

Also the new tires are chewing the front inner liners so that's another job I need to look at.
B

Reitrof said:
So I found that the cooling fan motor is not working properly. Seems to not work on the low speed. I'll need to do some testing this weekend to make sure that it is a fan issue.

Also the new tires are chewing the front inner liners so that's another job I need to look at.
Click to expand...

Are you talking about the fan speed that cools the cabin…. It could be the switch, but most likely a blower motor fan control. I believe the resistor that limits voltage to the motor has failed…. my p5 did that as well. I don’t think I fixed it either.
I had to take a heat gun to one of my liners….put a little indent where the tire was rubbing at tight cornering
R

It's the radiator cooling fan. Not sure how much a new one is but I got a quote for $275 for a used one. I'm going to keep looking.
R

So more work this weekend.

Determined that the cooling fan itself is the issue, wont work on low and med speeds and partly on high, so need to find a replacement.

Today removed all the plasti dip with the help of a product from dipyourcar called Dip Disolver which worked very well. 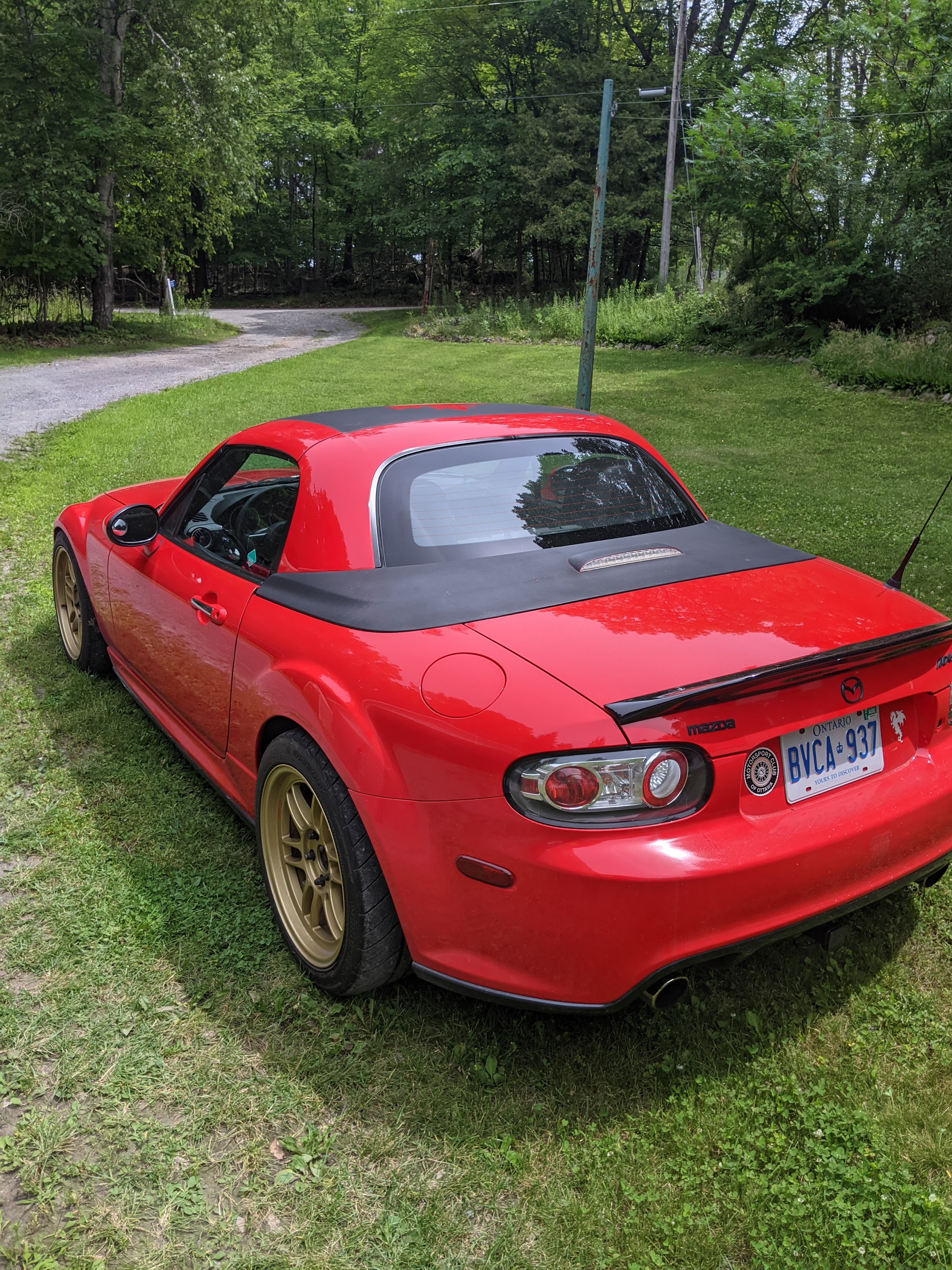 After removing it all. 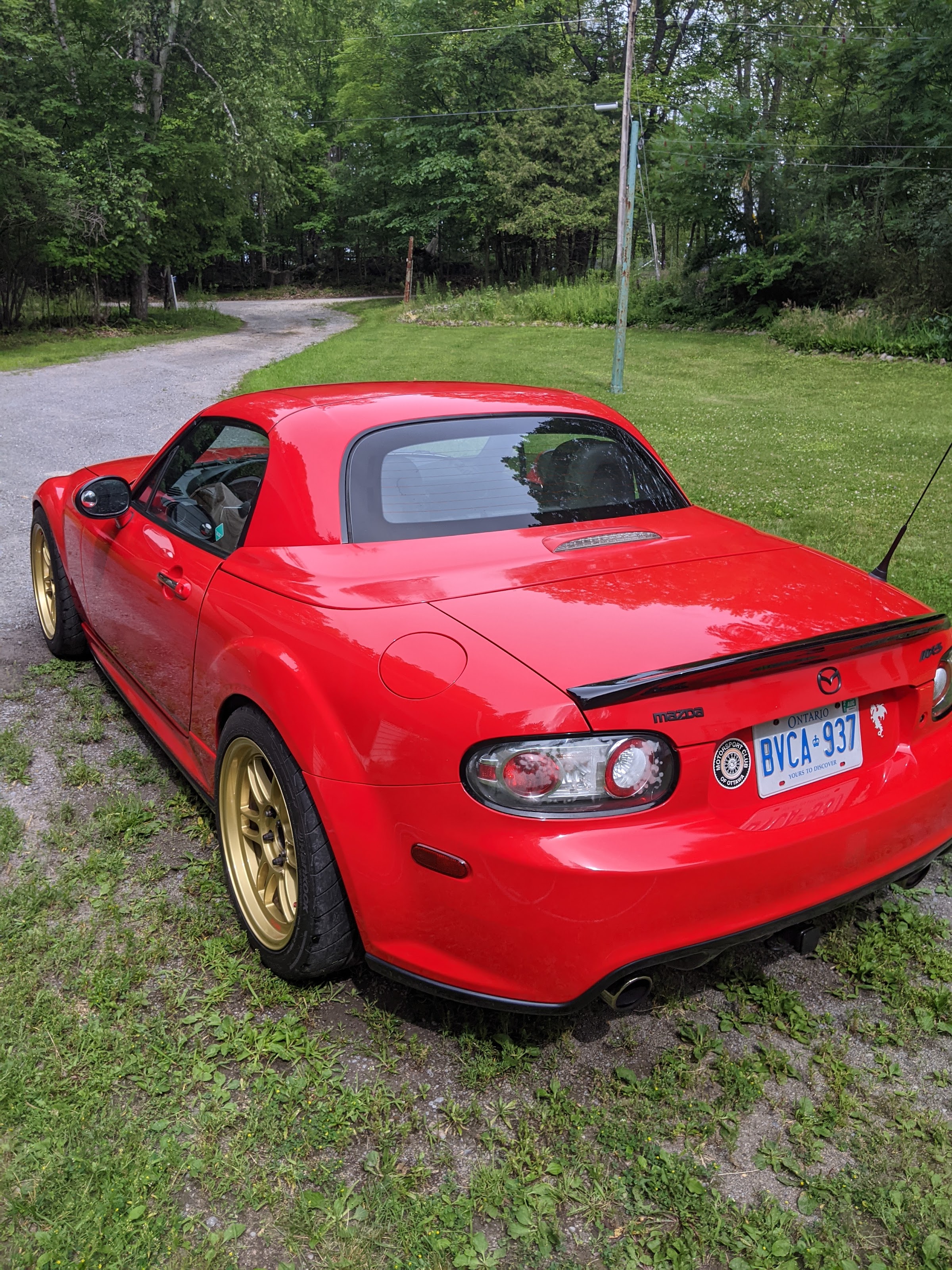 Hasn't been like this since 2010. Need to clay bar the car before I put the Canadian flag back. Not sure if I will do the deck lid, will wait and see.

Trying to get stiffer sways since the new tires have more grip.
B

I remember that car!

Looks good Bruce! If you wouldn't have told me, I would have never guessed that the roof and deck lid had been covered for 11 years. The rest of those red panels have held up well over the time.
R

Thanks Jeff, I was surprised as well. Seeing it was baking in the FL sun for 6 months a year and then back home for 6 years.

Lost my cool breeze scoop whike doing 70 on the highway. It was for the NC but I found that it fit the ND. It wasn't as tight as a fit and did make several highway trips in the past, guess I hit that perfect whirl of wind?
B

CTt3P5 said:
Lost my cool breeze scoop whike doing 70 on the highway. It was for the NC but I found that it fit the ND. It wasn't as tight as a fit and did make several highway trips in the past, guess I hit that perfect whirl of wind?
Click to expand...

Sucks! Mine got swiped last year in Florida….I started building my own out of a plastic intake from a BMW. Mocked up and tried, adjustments needed. Back to the bench!

Yeah it does suck but guess I was biding my time using the "wrong one". Ah well.... Good luck in fabbing your own and you have your first customer if you decide to "mass produce"!

Finally got the OEM cowl bracket for the FSTB installed. It was going well until I dropped the last bolt for the cowl bracket down into the engine bay.

Pulled the car up onto ramps and pulled the plastic panels on the DS off as that is where I thought it fell. Didn't find it but did find a half a dozen dead cicadas, some leaves and the remnants of a dead bird. I cleaned it all out, buttoned it back up and stopped my search as I was frustrated and it started to thunder. Trying to beat the rain, I got the cowl installed along with the new cowl weather stripping (my old one was ripped), tightened the brackets that hold the hard line to the firewall and the wipers installed. Plan to continue my search for the bolt tomorrow, if I don't find it, I will just order a new one from the dealer.

I may have your nuts!

Lol, I will let you know.
B

Did a little vinyl wrap today. The color actual is more metallic than the pic shows. Matches the other red pieces pretty well!

Thanks for the offer Mark but you can keep your nuts, I have my own. After seeing some pics online, including the ones you sent, I realized that four of the six that came with the install kit were for the studs on the new plates and the other two were for the firewall studs.

Before dinner tonight, I got the FSTB installed, thanks again Mark! 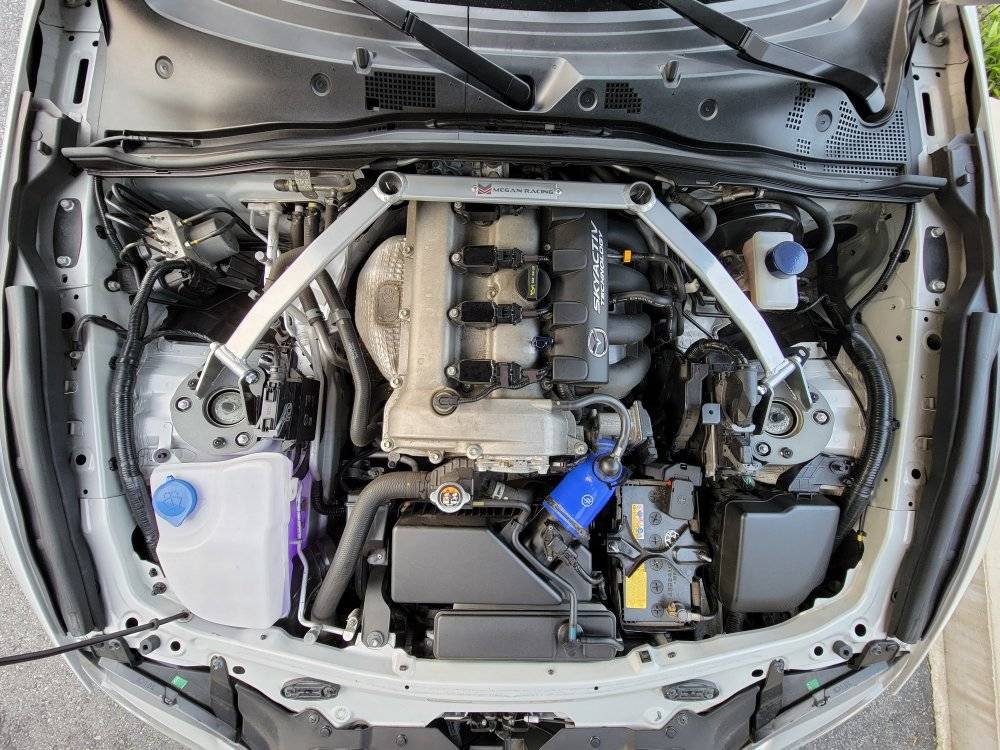 Great to see it installed!