Well, we finally got some snow beyond a dusting (about 2") and I finally got a chance to see their snow traction and it SUCKED. That is, worse than about any all-season tire I've had in the past. This is a sample of one (1) so keep that in mind. The tires have about 17,000 miles and were installed in November 2019. The temperature was/is mid 20's and the snow consistency was about what I'd call average or medium, meaning not a light ,fluffy blow away type nor a wet, heavy snow that makes great snowballs. The total tread depth is about 7-1/2/ 32" (was 11/32 new I believe).

I had mentioned on this forum in the past that I was initially satisfied but was still evaluating them. So, in that vein, other observations are that they are a quieter tire and ride smooth provided that the road is decent. They also transmit a lot of small road imperfections (tar strips, minor bumps) that the previous tires (General Altimax RT43) soaked up. Running a lower tire pressure to provide a softer, more absorbent ride gives sloppy handling compared to the RT43's. And it goes without saying that the RT's had better snow traction in the limited amount of snow driving that I do.
I'm putting this out here for anybody that may be considering these tires, and I haven't bothered to review other forum members experiences with this tire, so somebody else may love the one's they have.
Another thing worth noting the amount of wear versus the mileage. I have rarely for years gotten much over 30,000 miles out of a set of tires (except the RT43's which were on for 37,000 and could have gone a little longer if winter wasn't approaching) due to 95% driving around town/suburban (not stop & go city) which involves a lot of stops and starts and turns which wear out tires faster. It also wears out brakes, steering and suspension components and those little friction discs inside the transmission plus other components ad infinitum and is the subject of a different discussion perhaps. I also get new tires when the total tread depth is 4-5/32nd's if fall or winter is approaching. Otherwise probably run through summer ,then new tires. So factor this into evaluating the wear on these tires. Or any tires really.
Just wanted to give my evaluation of these tires and some related information. To me, tire shopping sucks as bad as car shopping, so maybe just see how much snow the future holds and put it off until next year. Unless I get stuck in a snowbank and finally get to use the AAA I pay for each year and never use.
Over and out, it's dinnertime.

Thanks for the evaluation. Here’s the Tire Ratings Charts on Grand Touring All-Season 225/65R17 tires from Tire Rack: 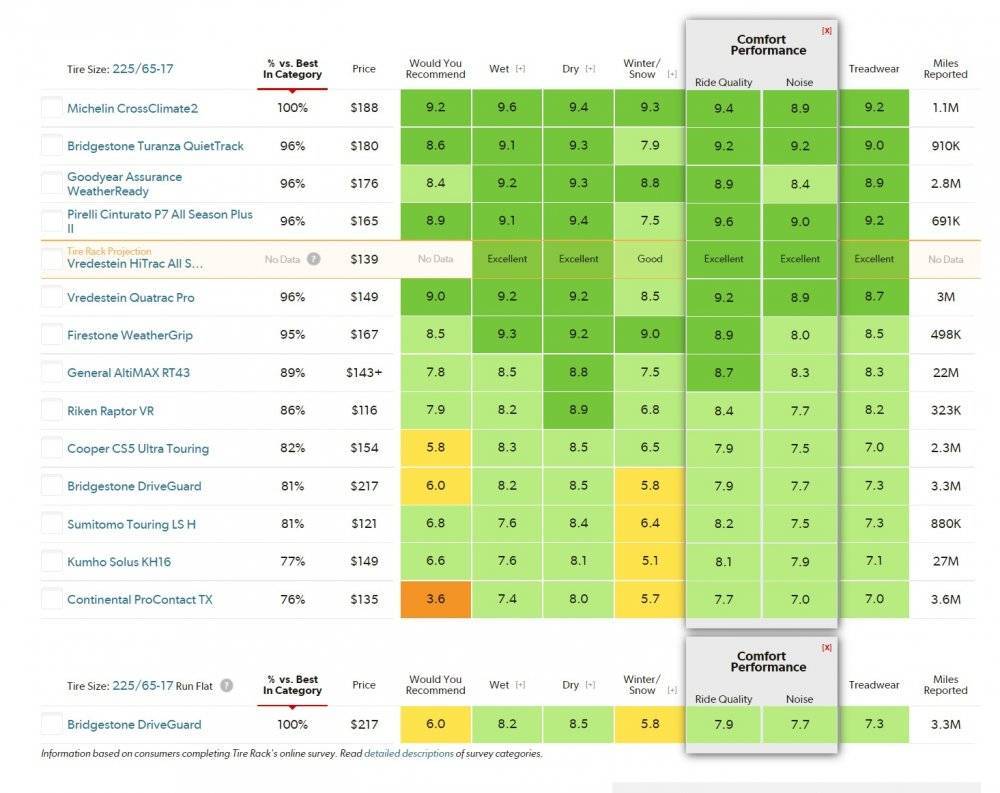 Honestly from not-too-impressed ratings and price I wouldn’t choose this Cooper CS5 Ultra Touring. There’re many tires which are better and cheaper, and it showed by the second lowest 5.8 “Would You Recommend” rating which is much worse than much-mentioned General AltiMAX RT43’s (7.8).
J

yrwei52 said:
Thanks for the evaluation. Here’s the Tire Ratings Charts on Grand Touring All-Season 225/65R17 tires from Tire Rack:

Honestly from not-too-impressed ratings and price I wouldn’t choose this Cooper CS5 Ultra Touring. There’re many tires which are better and cheaper, and it showed by the second lowest 5.8 “Would You Recommend” rating which is much worse than much-mentioned General AltiMAX RT43’s (7.8).
Click to expand...

Thanks for posting this chart and yes I definitely agree with your comments. I am a little surprised that the wet and dry traction aren't rated higher because those were pretty good and actually the best things about the CS5's. I recently reviewed Tirerack's test results and the wet and dry stopping distances (measured in feet) were pretty good.
Please log in or register to reply here.