That's an interesting setup. Is that how Fuelab recommends the install? In mine the line from the pump (with inline filter) runs to the fuel rail, then I have a line from the fuel rail to the FPR, and then the bottom port of the FPR goes back to the fuel tank. Your setup obviously works but I've never seen it done that way. I always thought the side ports were "inlets" only.


chuyler1 said:
Adaptronic does have a fuel pressure setting. I haven’t touched this table. Oddly, the fuel pressure and the mode is disabled when I select “deadtime / flow” so I didn’t mess with it. But if I change the injector type to ID1000 I can change the values, switch back to “deadtime / flow” and it stores it. So maybe I just need to try a fixed fuel pressure option instead of manifold ref. You can see in photo the settings are disabled. Anyway, thanks for pointing this out, I have something new to mess with!
Click to expand...

So under injector type you can select "dead time / flow" or "ID1000" among others? In the Haltech you set injector dead time (versus battery voltage) and flow rate (constant) regardless of the "fuel pressure type," which can either be "constant" or "MAP reference." Honestly, I don't know how much this affects the tune other than you have to pull more fuel than I do below atmospheric manifold pressures. Here's a quick article I found on ID's website: http://injectordynamics.com/articles/fuel-pressure-explained/


mymmeryloss said:
All of this reading is making me happy I’m not tuning my own 13b
Click to expand...

It's actually not that bad. I've found the car will actually run under a wide range of circumstances. The annoying part is getting it fine-tuned to where throttle response is optimized. You're also running a factory-style intake and fuel system so you have the advantage of being able to leverage off-the-shelf base maps to start. I literally had nothing to start from other than some suggestions. That's why even though I could initially get the car started it took me so long to get it moving. Over time I got more and more load points closer to where they needed to be so the car would drive under most circumstances. Even now there's still a couple of situations the car doesn't like such as very quick throttle changes or rapid drops in engine speed.
Last edited: Jun 14, 2018
C

From my reading on all FPRs, it doesn’t matter if the fuel rail is before it or not, everything is pressurized equally, which is why many OEM solutions now omit the return line and just place the regulator in the tank.

It does work, and after I made that switch in the ECU I was able to give the motor more throttle more quickly. The fix was definitely noticeable. There was still a slight hiccup if I punched it hard, but I just finished putting the vacuum line in last night and will make another drive as soon as I get a chance to see if that completely solves it.

So now I’ve moved on to a few other things. My “gen” light was turning on. When I wired up the new alternator I had to connect the sense terminal directly to the battery, I put a 5a glass fuse inline and it popped. I guess the alternator was back feeding through the sense line, so I added a diode and replaced the fuse.

Sort of related to battery voltage, I’ve been trying to get the electric fan engagement to not stall the motor. I can bump the idle control valve, which works great to increase idle back to a desirable level, but the immediate engagement nearly stalls the motor. Not sure if it’s the opening of the valve, the load of the fan (ie more load from the alternator) or the change in voltage messing with the injectors. My idle timing could be off too, meaning I just don’t have the torque available to handle the alternator...but my timing light is busted...ugh, another trip to the parts store. 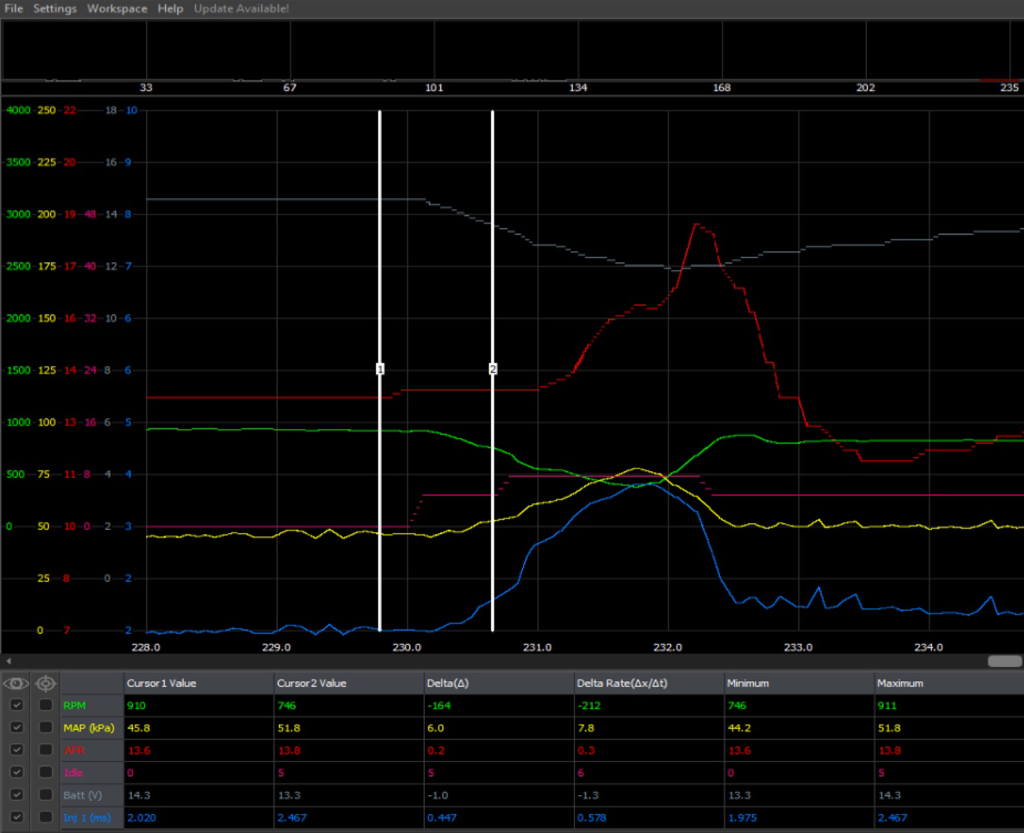 I thought you wanted the alternator "sense" wire connected to a constant 12V source as far away from the battery as possible. That way it senses the greatest voltage drop and can better regulate it. I have mine connected to the headlight circuit because it was the easiest, closest circuit that would see a large power draw. The electric fan constant source would probably have been better but that would have required running the sense wire around the front of the car.

What is your idle ignition timing? When I first got mine running I had 0 deg B/ATDC for leading and 15 degrees of split so trailing was 15 deg ATDC. My idle was actually really smooth. When my friend stopped by last October he advanced it significantly to around 10 deg BTDC but we kept the 15 deg split. The idle is definitely rougher now but I think that went a long way to help my issue of stalling when coming to a stop. I may play with it to achieve a happy medium of a smooth idle and not stalling. I don't have any issues with stalling when the fan comes on. I might get a 100 RPM drop that settles to 50 RPM lower than my usual idle (no idle control) but that's it.
C

You want the sense wire to be appropriate for the length and gauge of wire used for typical accessories. In my case, with the battery at the back, the length is perfect. It is sensing voltage at the battery as read through a 14ga wire. I originally had it connected to ignition but that may have been the reason I fried the first alternator. It was sensing an immediate change in voltage rather than a buffered reading from the battery which sort of works like a capacitor.

For timing, I locked the ECU at 0 and set the timing based on the original pulley that came with the truck. The manual says it is 0/-10. However, the previous owner slapped a sticker on the hood that mentions -5/-15 so I may be off by 5 degrees. Anyway, it will idle, at 0/-10 but it’s weak and hard to get it to settle into an idle after driving or revving. So I bumped it to 5/-5 on the timing table everywhere around idle and that has been working OK. Recently I bumped it to 10/0 to see if that would help. Jury is still out. I can get it to idle at 900-1,000 RPM with any of these settings, but the behavior just off idle and coming down from higher RPMs is what I’ve consistently been having trouble with.

Do you have any timing adjustments for cold water temps? Or a setting for startup? I can’t seem to get a good start without tipping in the throttle (which is in addition to fully open idle control valve). First 30 seconds to minute of running is always rough and it’s not a fuel issue, it’s definitely timing or possibly related to low voltage.
M

chuyler1 said:
Do you have any timing adjustments for cold water temps? Or a setting for startup? I can’t seem to get a good start without tipping in the throttle (which is in addition to fully open idle control valve). First 30 seconds to minute of running is always rough and it’s not a fuel issue, it’s definitely timing or possibly related to low voltage.
Click to expand...

Most of my start up adjustments are for fuel. I've got some pretty significant enrichment going on when coolant temperature is below 100F. Haltech also has a "post start enrichment" function I'm using. It's a 3D enrichment map that's dependent on coolant temperature and engine running time. Even when fully warmed up I increase fuel by 5% when starting that car. Honestly, I think this is a little rich because I generally have to open the throttle a bit to get the car to "catch."

I do have ignition corrections based on coolant temperature though it's not significant. For example, this time of year I'm using less than 1 degree of advancement during warm up. I checked again and my idle timing is actually 14/-1 deg BTDC. During cranking I have the timing locked at 8 deg BTDC. I also have the timing advanced by a degree or so below idle in an attempt to help the engine "catch" itself
C

Cool, that’s basically what I see in the base maps for Adaptronic that I have transferred over...assuming I was right about my pulley being marked at 0, not -5.

I watched a video on MCM2 YouTube Channel (mighty car mods) where they upgraded a 2.0L Datsun to EFI with Haltech. They used a knock sensor with the old carburetor still attached to get the timing right before putting the fuel injector throttle bodies on. I feel like I need something similar to lock in the timing table so I can just mess with fuel after that.
M

So is the issue you don't know what the marks on your pulley are: 0/-10 or -5/-15? I'm pretty sure 0/-10 was the stock target for the older 13Bs. I'm not sure where the -5/-15 would have come from. One solution would be to pick up one of Racing Beats main pulleys to check since they're marked and include 0 deg. You don't have to keep it if you don't like the underdrive aspect. I forget, what are you using for your crank angle signal?
C

I have an Atkins Rotary pulley kit, but I transferred over the marks from the original pulley on the truck. I assumed they were 0/10 but recently I noticed this sticker placed on the hood by the man who restored the truck originally.

When I set the timing. I locked it at 0/10 and used the S4 crank angle sensor to adjust timing. Then on the timing table I have experimented with everything between 0 and 10, they all work, but as I said above, the motor doesn’t like to drop down into a strong idle, it seems to bounce around sometimes, and other times it’s fast, and then sometimes when coming down from higher RPM it just goes right past idle and hiccups. It’s been doing that less lately, but I still don’t have what feels like a strong solid idle. 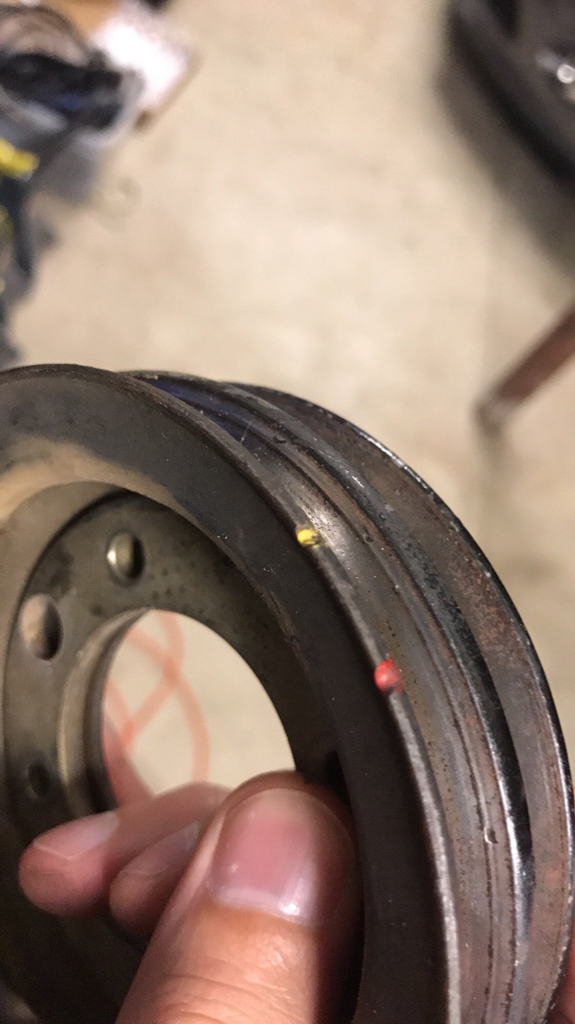 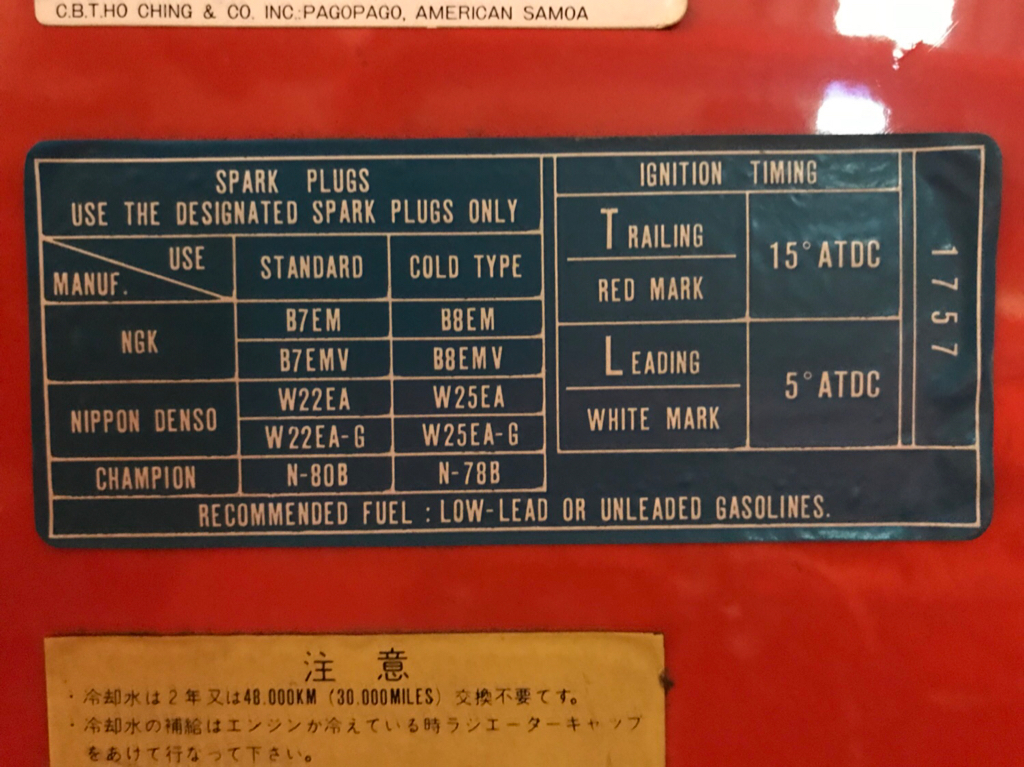 Ever thought about upgrading to a multi-tooth trigger wheel and variable reluctor or Hall Effect sensor like the ones Full Function Engineering offer? I have no experience running a stock FC-style crank angle sensor on my current setup but all the tuners I know seem to rave about FFE's stuff.

I went and looked at the '75 and '76 REPU FSMs here: http://www.wright-here.net/cars/rx7/manuals.html and in both the stock idle timing is given as 0/-15 BTDC. It also appears that the stock pulley should have three marks: 0 deg BTDC, 15 deg ATDC and 20 deg ATDC. The last one is a "leading retard" mark. Have you tried adjusting the split at all?
Please log in or register to reply here.