Here's what the book says about resistance:

Wires are another one of those fussy things that can be hard to pinpoint.

I just read this thread over again and found these:


zizaspeed said:
got some used coil packs and wires which also came with injectors.
Click to expand...

Do you have used wires installed ???

DEFINITELY replace them if you do.

I went with the NGK pair of Ignition wires,... There is cheaper ones availeable but NGK makes trusted plugs for our car so I figured I should be able to trust their wires too. (they're a cool blue color too.)
P

Have you replaced your PCV valve ???

Wouldn't it suck if 2 minutes and a three dollar part fixes your problem ???
Z

yes that would be nice....but I have replaced the wires with new ones back in november as well as my pcv valve. And I checked it the other day and its still moving just fine when I shake it. So the resistance I measured seems quite low actually compared to what you sent me.
H

I would still bet it's the coil pack/wires/plugs. You may have them gapped incorrectly or loose connection or bad coil.
Z

I actually just put the long reach plugs in 4 days ago to help with the stuttering/shakin in 1st 2nd gear. Coil packs I had exchanged under warranty for new ones at autozone last month. The wires would be the only thing left, and after measruing the resistance of them i'm considering buying some ngks
P

Something else to think about :

The Canadian Egr mod is completely compatible with US models. Not only did I put one one my personal P5 several years ago and have not had the random misfire/low idle BS that the US Egr valves caused, but I have installed the Canadian variant on several of my customer's P5's to correct the same issue over the years and not one has come back with a problem. For some reason the Canadian version is also cheaper, even with the extra cooling lines and such, go figure.


Here's a quote from the following link:
"More importantly, while Mazda acknowledges the EGR valves are problematic, they will NOT replace your catalytic converter damaged due to the P0300 random misfires in connection to the TSB."

Yeah I actually did that couple months ago lol replaced mine with Canadian one. Today cel turned off on its own, last time I pumped I put 89 in, I noticed a cause in that list was poor fuel quality....
Z

And of course the light came back on like I expected lol.
M

yeah, man its a headache. Now I'm getting cylinder 1 and random misfire. I ordered fuel filter and housing , so I'm gonna change those guys out and see if that helps.
Z

Changed the fuel sock and housing yesterday, the filter inside the housing was pretty nasty and beat, cleared code and then drove car. The code came back within 20 minutes, checked code and its random misfire. Surpise!....not.

So I'm running out of options lol and funds. I have ngk wires on order, a possible cause is also fuel pressure regulator but I don't want to just buy a new one for no reason. I might try putting better fuel in and see if that helps, last 2 pumps have been 89 from Arco.
Z

Heres what my filter and sock looked like.....pretty bad. 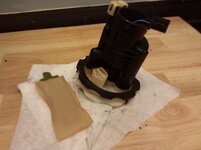 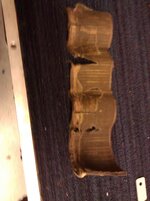 I think you and I are going through the same problems, I am going to replace intake mani gasket and replace my egr valve to the Canadian version this weekend.
Z

mjv4235 said:
I think you and I are going through the same problems, I am going to replace intake mani gasket and replace my egr valve to the Canadian version this weekend.
Click to expand...

One of the possible causes says excess air between maf and dynamic chamber, I wonder if that's happening to me from my eBay short ram
T

I don't know if you've solved this problem yet or not but I just found out that the reason for my engine misfire was because the screws in my intake manifold came loose, got sucked into the engine and smashed my spark plug. Apparently there's a recall on this but not for my Vin#. I did most of the things you did including replacing the EGR which fixed my idling problem but not the misfire.
M

In case you have not yet fixed the problem i have a little info to throw around.
When i bought my p5 it had a misfire. i changed the coils wires and plugs and nothing. changed the egr, nothing.
due to the missfire, a coil began to give out and fumes were burning in the cat, melting it, changed that out too. nothing
so finally i bought a header on ebay,(cheap ass one) and did not connect the egr.. car worked better but randomly my rpms would drop. (i also have a cheap ebay CAI) i repositioned my MAF a tad bit to the right and did a radioator flush and i am currenlty running a bottler of water wetter, 1/3 of coolant, and the rest water. I was running hot. Back to zooming
My temp gauge never moved, however you could hear a kind of grinding noise (kind of like dirt hitting the inside of the headers) which only happened after running the vehicle a while. F*** the gauge MAKE SURE it is not running hot. or that you are not pulling in hot air. if the back pipe to your CAI in tapping againt the brake lines you have some crazy friction and probably a rattle in the MAF, thats a NO NO
Z

Thanks for the info. What I've noticed is when i have almost no gas meaning the light will be on soon, my cel goes away . And stays off until I pump gas and start driving. Im wondering if this is related to my fuel Pressure regulator.

I don't know if this helps at all but there is a few emission CEL codes that involve both the ECU and the fuel level.

Perhaps your fuel level needs to be above 35% for some emission circuit to kick in and start the misfiring ???

Do you have a raw fuel or rotten egg smell on the freeway ??

P.S.... If your pre-cat is dead or you have a header installed, then an engine misfire doesn't really matter too damn much. You're not gonna damage your main cat.

Unless you've got emission testing in your way then mild, occasional misfiring shouldn't really matter.
Please log in or register to reply here.