How to Measure Transmission Fluid Level in Mazda3

I'm surprised that I couldn't find a thread on this which actually answers the questions I have about this basic maintenance technique. It's a simple question - How to properly measure the automatic transmission fluid (ATF) level in my 2016 Mazda 3. The owners manual doesn't mention it. Below is what I did.


As best I can tell, it's showing a level well over the upper limit line. See the attached photo. I'm assuming that the two sideways lines in the dipstick near its middle are the upper an lower level markers. I've never had any maintenance performed on the transmission, such as adding or changing ATF since I bought the car new 25,000 ago. Why would it be showing a level so high?

In general, I've not had any issues with the transmission, other than over the past 3-4 months, I noticed 1 or 2 shifts which seemed a little odd, but nothing which would normally cause anyone concern. Is there some process that I'm supposed to go through which I didn't - like shift through all the gears while the engine is running? Some unusual warm up sequence? Should I not be inserting the dipstick all the way back in? Something else?

By the way, I've also got a 2017 MX-5 with 17,000 miles on it. I checked the ATF level in it using the same techniques and saw the exact same thing. If there is a known document or article which details the proper way to check the ATF on late model Mazdas, I'd appreciate it if someone could point me to it. The best I've been able to find so far generally say little more than find the dipstick, remove it, clean it, replace it, and check the level. No mention of proper vehicle warm up or where the upper or lower marks are on the dipstick. Bottom line here that for 2 out of 2 vehicles checked, the 'obvious' methods are producing generally unbelievable results.

I believe my daughter's 2002 Protege required that the fluid be warmed up and the engine running (whith car on level ground) when the dipstick level was checked. If this is also the preferred method to check our 3's AT level, that may explain why yours looks higher than the max level.

How to Read Mazda ATF Level

Concept - Bingo! that was it. The car has to be running at temperature. Thank you for the tip. I knew the temperature part, but the few references I could find on line about measuring the ATF level all refrained from mentioning that the engine had to be running. 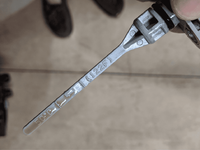 I did think about the possibility that the engine had to be running, but rejected it because it seems impractical. It makes you choose between two bad options.

1) Leave the air filter system in. You then can only get to the dipstick by running your arm down against the very hot radiator hose and burning yourself.

2) Removing the air filter system which gives you all the room in the world to work without a burn hazard. But to do it, you have to disconnect the wiring harness to the throttle body - and run it like that - disconnected. I figured that would generate OBD II diagnostic codes.

Neither of these options appealed to me, but I chose poison option 2. Sure enough, it generated the same 3 OBD II diagnostic codes on both vehicles. For me, this wasn't a grand issue, because with my OBD II monitoring system, it was easy enough to erase them. But for anyone without such a system, now their vehicle will be running around with those air codes logged and could cause unneeded labor charges by some car mechanic looking into why they are there. Or it could confuse a mechanic who is chasing some other problem. Perhaps there's a third option that I'm not thinking of which will allow one to work safely without generating OBD II diagnostic codes.

But all's well that ends well. Thank you again.

Good news, DSPGuy1.
It could be that a dealership technician removes the air filter system and later resets the resulting code. I have a Scangauge always plugged into the OBD2 port so resetting is quick and easy, but you are correct in that most people don't even have a scanner in their garage. I have noticed that my owner's manual seems to have more how-tos than previous cars' manuals. Typically, I buy a factory service manual but have not needed one for the 3, yet. It has only 22,000 miles on it.
B

I did option 2 but had the MAF sensor connected and the top of the air filter housing turned sideways. This gave me plenty of room to check the tranny dipstick with the car running. I figured running unfiltered air through the engine for a couple minutes really wouldn't hurt anything.
B

Also if you don't have an obd2 scanner to reset the code you could always disconnect the negative battery terminal and put it back on to reset the code and get rid of the light after you put the filter back on and connected the sensor. Solved the issue for me.
Please log in or register to reply here.