Moderator
Anyone intro retro gaming? Here I go showing my age again but I find myself often times playing old nes, snes, and arcade games. Wanted to see if anyone else shares the same interest on here. Unfortunately I don't have room for an actual arcade machine else I'd source an old cabinet, restore it, and make it play all the games. Just to name a few faves off top of my head:

It's very easy to get all the roms and emulators freely online.

I like the Streets of Rage series and the new one is pretty good.

Ever play Super Smash TV? That's a good one.

Moderator
There's plenty of nerds on here lol. Yeah I'm familiar with the roms. Never really got into super smash brothers as odd as it sounds.

323 said:
There's plenty of nerds on here lol. Yeah I'm familiar with the roms. Never really got into super smash brothers as odd as it sounds.
Click to expand...

Smash TV and Super Smash TV were top down shoot-em-up type games. Super weird but I played them a lot as a kid. Good times!

I played a lot of NES and SNES as a kid. Lots of those games are still just as fun and just as challenging as some of the current games on recent consoles. On top of the NES, SNES and PSOne emulators I have on my laptop, I have one of those SNES Classic machines that's been modded to add more games. A few days ago I actually sat down and spent a couple of hours finishing MegaMan X.

Some of my favourites (I'm big on RPGs lol):

Moderator
Ah MegaMan X! Also another fave. Not sure why it didn't pop up in my head earlier.

So I beat MegaManX (forgot how much I loved the soundtrack!), and decided to start Zelda: A Link To The Past. I finished Zelda a couple of days ago, so yesterday I started Secret of Mana.

I love how far gaming has come since the SNES had its glory days, but there's something about these older games that always keep me coming back.

How could I forget this game.. if you played this in the arcades, you might be interested in this documentary (keep in mind that its 1:45 long).

Moderator
Yeah I never got into killer instinct for some reason. Most of my friends did though.
H

Is Heroes of Might and Magic III already considered a retro game? I wonder if someone else is playing this game besides me
P

I just downloaded a Tetris game to my phone.

I went with the black and white version just like the original version on the GameBoy that I played 28 years ago. Lol

I turn the sound off too, and just play the game.

I didn't have any of the old consoles growing up, but I am a big fan of playing some arcade games at a arcade/bar here (sadly have not been since March). Pinball, Frogger, Tapper, Pac Man, Galaga, The Simpsons, Mario, Donkey Kong, some more I am sure I am forgetting. Used to go at least twice a week.

EDIT: For a while they had some really old school pinball machines and I had a lot of fun with those.
Last edited: Jan 19, 2021
P

I was the envy of the neighborhood. It was way cool. Lol

Now that is retro gaming!! Love it.

That reminds me of an old MS-DOS game I used to play with my friends. Tank Wars Moderator
Not really retro but I've been playing Mario 35 lately. It's a reboot of a retro game! lol
R

323 said:
Not really retro but I've been playing Mario 35 lately. It's a reboot of a retro game! lol
Click to expand...

Been loving mario 35!!! Finally after so much trying I managed to get 1st two nights in a row. So satisfying when it finally happened. 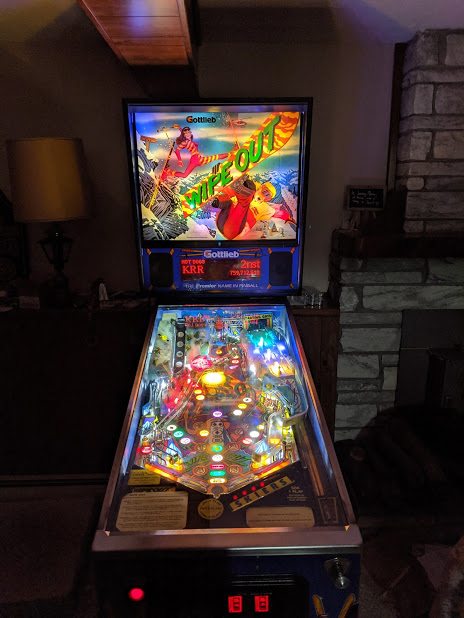 Awesome pinball machine you have there!
Please log in or register to reply here.

B
Off Topic EV's and their impact...