I'm hoping for some guidance on where to go from here. I've got 147k on my 03 Protg5, and a month or two ago I started getting these same 2 codes. Always both, never one at a time. P2009 is Fuel Pressure Regulator 1 Control Circuit and P0090 is Intake Manifold Runner Control Circuit Low Bank 1. Here's the run down of symptoms I've been having.

The past day or two it's had a rough cold start. It'll shake just a bit and give me high rpms but if I give it a few seconds it'll calm down and drive fine.

Occasionally if I hit the gas my engine will stutter and buck like it's going to stall. When I first noticed it I was afraid it was something with my transmission but it happens in every gear and I think it's more likely that it could be fuel starvation.

If I'm idling I'll occasionally feel a stutter in the engine, maybe a misfire but I don't get a code for a misfire when it happens. Almost feels like a compressor kicking on.Sometimes it won't happen at all, sometimes it'll happen every 10-20 seconds. I don't notice it at all if I'm driving.

I haven't had any loss in fuel effeciency that I've noticed. I've only had the car for a handful of months but I'm getting around 31.5mpg on average on my daily commute per the Bluetooth OBD2 scanner I use in addition to the Torque Pro app.

I flushed my Coolant last week and I noticed an electronic click noise coming from the engine bay, every minute or two it seemed, just one click that sounded like maybe a short. I couldn't find the source of the noise but it seemed like it was coming from the passenger side, closer to the firewall.

This may be related in part to the performance issues I've been having but I don't think it's the cause for the CEL, but the rubber tube coupler holding the aftermarket cold air intake is old and cracking. I've bought 2 replacements so far buy neither of them fit, the CAI was on the car when I bought it so I don't know the exact specs.

I really hope you guys have a clue on where to go from here short of testing every piece of wiring I can find.
P

We don't have a code P0090 either... I forget whether or not the "Intake Runner" refers to the VICS or the VTCS (but there is no "circuit low" code for the VICS)

You've probably got a bad VTCS solenoid valve. (which could throw the other code too ??)

These are the VICS and VTCS solenoid valves. 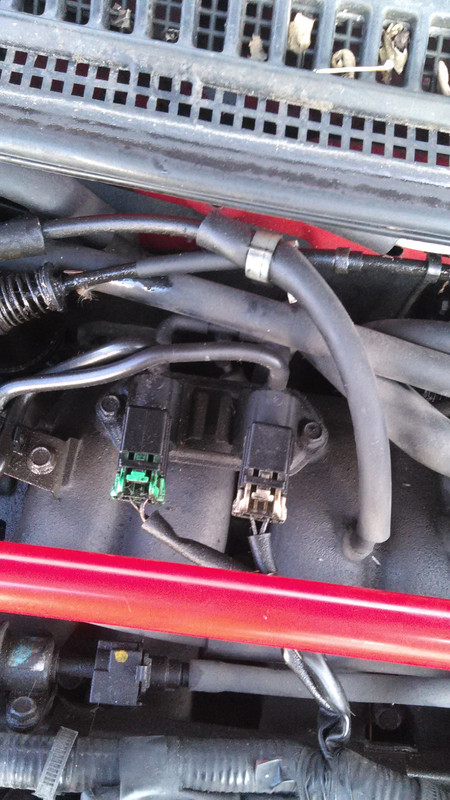 I'd start with the VTCS solenoid valve,.. they have been known to fail.

If the VTCS valve is malfunctioning, it could lead to stumbling of the engine and most of the symptoms you've described.
P

Here's a link to the free download of the factory service manual.

Thanks for the nudge in the right direction! I'll check those first. I'd read it could be anything from bad wiring to a dying fuel pump, but if the VTCS solenoid has been known to fail then hopefully that's all it is, especially if you think it could be throwing the other code too. In fact that might make sense, because the codes always come and go in pairs, never appearing solo.
I'm not 100% sure but I think it refers to the VICS, the green plug, which looks like it's working okay but I guess it's what's on the inside that counts. I tried a "quick fix" I'd heard about where I manually wiggle the rod on the actuator to clear out any gunk that might be gumming up the butterfly valve. I thought it had worked because I felt like it was running smooth and the CEL stayed off until a day or two later when it came back in full force, stutters and all.
P

heitktebinltraj said:
,... if the VTCS solenoid has been known to fail then hopefully that's all it is, especially if you think it could be throwing the other code too...
Click to expand...

I'm just guessing there,... It could be the other way around ??

heitktebinltraj said:
.. I tried a "quick fix" I'd heard about where I manually wiggle the rod on the actuator to clear out any gunk that might be gumming up the butterfly valve...
Click to expand...

It could still be a mechanical issue and the ECU responds with a code.
Check your actuator and see if it operates smoothly.
Check your vacuum lines running to it and make sure they aren't cracked/leaking.

I would suspect that the ECU only responds to electrical issues with the solenoid valves and not "know" whether or not the actuator actuated or not further down the line.
P

heitktebinltraj said:
,... I'd read it could be anything from bad wiring to a dying fuel pump,...
Click to expand...

If the fuel pump is going bad it may not deliver the proper pressure under all circumstances.

But start with the the solenoid valve.
H

Finally found the time to look things over. The vacuum gauge I rented from AutoZone didn't come with any connectors, go figure. So for now I switched the VICS and VTCS solenoids. I'm hoping to see a VICS CEL pop up as opposed to the VTCS one I've been getting, if this is just a faulty solenoid switch I'll be ecstatic. I let it idle for a couple minutes warmed up and no codes yet. It was probably in my head but I wasn't getting any of the hiccups I'd been feeling at idle before. Guess I'll just have to wait and see.
H

Just went for a quick spin, no CEL yet but I'm still getting a "stutter" when I give it a lot of gas. I'm getting a new tube coupler for my CAI tomorrow, and now that I think about it spark plug wires and coils might be a good idea. I got a code for a cylinder 3 misfire the other day that went away pretty quick, I assumed it was related to the problems I'd been having but it might be that I'm overdue for a wire change. So I'll do that bit of maintenence and see if it makes a difference.
H

Alright, CEL came back on with no change. So I think that rules out the solenoid being bad. It also had a random misfire code with it this time I hate surprises. I guess it's time to look at the PRC valve. If it's going out then I'm probably running lean which would definitely explain the misfires. I have no idea where to start for the PRC so it looks like I have some reading to do
P

I threw the code for the PRC about a year ago.
I removed the solenoid and applied 12V to the terminals.
It clicked twice then stopped clicking.
I swapped the solenoid with the one from my parts car and that fixed it. I almost forgot about that,.. I got the code then swapped solenoids all in about fifteen minutes.
P

Having both solenoids go bad at the same time is unlikely, but possible. Have you checked the vacuum line that feeds both of the solenoids? If it has a hole or rotted or not pulling correct vacuum, it's possible the computer is seeing the "failure" of the solenoids because neither one has vacuum supplied to it.
H

pb4ugotobed said:
Having both solenoids go bad at the same time is unlikely, but possible. Have you checked the vacuum line that feeds both of the solenoids? If it has a hole or rotted or not pulling correct vacuum, it's possible the computer is seeing the "failure" of the solenoids because neither one has vacuum supplied to it.
Click to expand...

Shoot, that's a good idea. Is there one line that feeds both solenoids though?
H

Also, if there was a leak in the supply I think I'd be having problems from all 3 solenoids, because the VTCS and VICS are definitely on the same line, I can't tell on the PRC.

The last time my CEL came on I checked it just for fun and it was only giving me the code for the PRC fault. That was the first time that's happened since the problem started, they've always always come and gone as a pair. I switched the VICS and VTCS solenoids a while ago but it still threw a code, I never switched them back because I figured it didn't matter if that wasn't the problem and they were both working then why bother lol. The only other thing I've done since then was replace the leaky tube coupler on my CAI.

So maybe that code will come back on, hopefully not. I'll just play the waiting game til then on that one.

I bought a new PRC solenoid on a whim because I think it's my problem, I'll throw it in tomorrow and hope that it works. If not it was only a few bucks and it's back to the drawing board. Hopefully I don't have to start getting all up in my fuel pump.
H

heitktebinltraj said:
I'll throw it in tomorrow and hope that it works.
Click to expand...

Just kidding, I couldn't wait. I threw it in just now, cleared the codes and drove it for about 10 minutes. Nothing came back on right away and she didn't show any symptoms so I'll take that as a good sign but hold off on officially announcing myself in the clear. I'll see if it comes back on sometime tomorrow.
H

It's been a few days and the codes for either of the solenoids have both stayed off. However I am still getting a cylinder 3 misfire, P0303 I think. I changed all the plugs about 3k miles ago because I was getting a misfire and that fixed it, but now it's misfiring again. I changed the wires/coils yesterday and it's still misfiring. Dirty MAF sensor maybe? Could've gotten dusty from my leaky tube coupler on the air intake.
P

This is what the Service Manual says...

Thank you!
My RPMs still waver at start and idle which leads me to belive it could be a vacuum leak or my MAF sensor giving false readings, especially because the misfire only occurs half the time. Is it possible that would cause a misfire only in #3 though? I did get a P0300 code once but it went off pretty quick. Sometimes I'll drive somewhere no problems, sometimes it'll go crazy. It also only happens when I punch the gas, like to pass someone on the freeway or to take off from a light. If I back off on the throttle under ~50% the misfire stops and I can drive normal. So I don't think it's an ignition problem, but that it's running lean/rich somehow.
Also, I think this is a seperate problem than what I made the thread for technically. Should I make a new thread? Not sure what the etiquette is. Thanks
Last edited: Dec 15, 2018
P

Changing the focus of your thread is up to you. As long as people see it to respond.

You may have a partially fouled injector. That could certainly be cylinder specific.

If it were me I'd put half a can of seafoam (or some kind of injector cleaner) in the gas and run it through.
It doesn't cost much and might fix your misfire.
Please log in or register to reply here.