What have you done to your P5 today?

i12drivemyMP5 said:
Look at MSP springs, they do like .75 drop IIRC, and then there are Tein H-tech springs that lower 1.3 front and .9 in rear. Those might be something for you to chk out. There was a great thread from back in the day that had all the brands with spring rates and lowering amounts but that chart is gone from the thread. I just read thru 20 pgs of info to find out what I needed..........Espelir are 179/157 and 1.5 all around. Tein S-tech were 190/170 and front dropped 1.9 and rear 1.4

This is helpful, thanks.

What are you thoughts on sourcing MSP springs? I'm not sure how much these springs will have degrade over time and i'm no stranger to the junkyard but have never seen a MSP which isn't completely stripped. Can they be purchased new OEM at a reasonable price? I'm on a budget.

More likely option for me would be the Tein springs. I found Tein H-Tech's for the Protege5 on Tein's website for $325, but I also searched the part number on eBay and found these for $213 which appear to be the same ones. Thoughts?

Also, is this the chart you were talking about? Had it on my computer from reading that whole thread a while back. YASSSSS!!! That thread, and your saved photo is fantastic!

I put this together based on some values on that sheet and what I have measured/put together based on a friend's thread from another forum. It's helped me to get an idea of how to set up my car for when I next pick up a set of struts/springs. I MASSIVELY assumed the diameters of the stock bars, as they are noted, as well as the effective springrate based on a diagram someone posted. 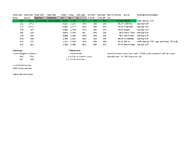 This is with weight of my particular car before the KL swap, so I'm really waiting to get the car on corner scales before I decide on what to go with for autocross. Also, the hulking size of the rear swaybar is impacting the front roll bias in my case.

Contributor
Dunno where mine lands on the chart but has Tokico Illuminas, Espelir rears and not sure which fronts, Tein-S or Espelir. Has factory sway in front, Progress 22mm rr sway, full load of GT Spec chassis bracing and STB fr and rr. No hatch cage but everything else including trailing arms. It definitely feels firmer with the Espelirs and dampening set on 4 on the Illuminas. May come back down to 3 on that. Doing fronts tomorrow and will see if Tein = 1.8 drop or 1.5 and also see what the Espelir does which I expect to be 1.5. I would like to get 1.8 drop up front to keep rake where it is but have better spring rate than the beat up 15 yr old Maxspeeds in there now. I can afford .25 less drop up front from where it is sitting now but no more. My rear wheel arches are at 24" with Espelirs and fronts with Maxspeeds still in them are at 23.5". Really like to keep it pretty close to how it is sitting now. Fun pics from today...more coming from doing fronts tomorrow................. Obligatory: Strutting your stuff! I love new parts and am quite jealous of how clean things look under there. Would like to get my hands on another rear strut tower bar. I had an old Corksport one but sold it a little while back... And the front tower bar doesn't clear the Milly intake manifold, so I've got to junkyard hack-and-slash one for future modification.

If you're pulling photos from your Google Photos cloud, it has a tendency to rotate them sideways for some reason. I've run into that quite a few times now...

I'm trying to put together a pretty "easy" sheet that's rather well worked out regarding what to change, and what to leave alone. Obviously not going to lock cells and the likes, but would like to make it to where, when the time comes I can measure up a mate's Contour suspension and see what gives with that thing!

Pondering why there are holes in my battleship! (from a previous owner, I'm going to figure out how to seal them soon. Two on the driver's taillamp, two in the filler cap area, two in the hatch lid around the window, and then the two holes for the "guide" on the taillamps are wallowed out. This car has lived a strange life. But it's otherwise pretty well free of rust! 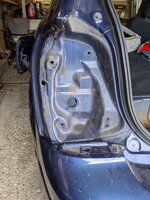 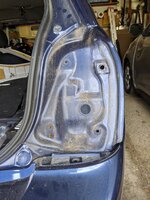 Contributor
I have a rear STB that I was using before I scored the GT Spec one. It was for MX-6 and fit perfectly. Has black brackets and polished silver bar. Lemme know if interested and I will snap some pics. Trying to get rid of some things not gonna be used that I have piled up around here. That rr stb would be one of those items. I see you're in MI.....I'm in TX.


pics are just from fon to email to PC then uploaded. That 3rd pic with missing strut didn't flip. Not sure what catch is..............maybe the vertical portrait pics flip and the horizontal landscape ones don't.
Last edited: Apr 9, 2020
R

This Forum Rocks! I too am looking at the Tein kit...
I agree that a MSP will be JUST as old as a P5 and a lot more thrashed....
So new equivalent seems to be the route to take....

New front rotors and pads.
before Rona_D said:
This Forum Rocks! I too am looking at the Tein kit...
I agree that a MSP will be JUST as old as a P5 and a lot more thrashed....
So new equivalent seems to be the route to take....
Click to expand...

I happen to have a set of Tein S-Techs that I am not using. They were tested on my vehicle this week during my coilfest and I decided to go with the Espelirs. Nothing wrong with the Teins, just like the ride height of the Espelirs better, that and the higher spring rate on the rears. Not sure how bad shipping would be on them to even make it worthwhile for either of us. They are just gonna be "inventoried" here on the parts rack otherwise.

Contributor
Alrighty then...........Coilfest is all wrapped up. Espelirs got the call and it is win win......ride much better, ride height perfect for my setup. Ditching the 12 yr old tires for new ones and a fresh alignment coming soon.........or some 22v for the bumper and lip. Moderator
Evade! Glad to see you’re still around. How and where did the twm ss break? Just for note taking. Mine is prolly about a decade old now lol

I've got one that's an unknown age and, insofar as I can tell, there's nowhere I'd readily anticipate a failure point.

I watched it snow on my P5 today. Michigan is strange, but I suppose it's not totally unusual to see this stuff this time of the year...

Contributor
Some fresh new General G Max AST05's and reigned in that passenger side front toe being out with an alignment..............tires & alignment added almost as much ride comfort as the fresh coils did. Between the 2, much happier than before. Coils had 15 yrs of use and tires were 12 yrs old but still more than half tread left. Very noticeable and appreciated difference in ride comfort. i12drivemyMP5 said:
Some fresh new General G Max AST05's and reigned in that passenger side front toe being out with an alignment..............tires & alignment added almost as much ride comfort as the fresh coils did. Between the 2, much happier than before. Coils had 15 yrs of use and tires were 12 yrs old but still more than half tread left. Very noticeable and appreciated difference in ride comfort.
Click to expand...

My car needs some better tires and I was looking at the G-Max AS-05s a while back, but wasn't sure about quality of General brand products over other brands like Michelin, BFG or Continental. Can I ask what tires you had before, what you think of the AS-05s now in comparison, as well as what size you got them in?
Thanks!

^^ My experience is with their Altimax Arctic winter tires and the outgoing "model" was that they were great as both a winter tire as well as a RallyCross tire.

BenjiHoggi said:
My car needs some better tires and I was looking at the G-Max AS-05s a while back, but wasn't sure about quality of General brand products over other brands like Michelin, BFG or Continental. Can I ask what tires you had before, what you think of the AS-05s now in comparison, as well as what size you got them in?
Thanks!
Click to expand...

I had 12 yr old Nexen (Lexani) N3000 205/40/17s. Squarer shoulder but louder and harsher ride at 37psi. Was 2nd set and they were OK. The Generals have been getting good reviews for cost and quality. Been researching all 205/40/17s for awhile now. Bought same size - 205/40/17s. The shoulders aren't as square but they have rim protection, ride much quieter and more comfy at 37psi & have 500 treadwear & AAA ratings. At the rate I put miles on this car, they will probably be replaced because of time, not wear. Another reason I did not go with more expensive bigger name brand set.

I've seen your photos and that nice bumper and lip you on your car. They'll look even better when they've got some 22v on them!

I think i'm going to need some new 22v on my bumper as well, alas. Someone tapped my front end this week and sent cracks through paint. What a shame. I have no license plate to take the oomph. The bumper already had 150K miles of damage including some small peeling spots, but it never looked this bad.

Does anybody know what the cheapest and most cost effective way to repaint the bumper would be? I'm 90% sure it's not cracked.

Benji
Please log in or register to reply here.

Top
Do Not Sell My Personal Information