I would say about 50% of people in Quebec does that. But not with 22s though. Other than protecting the wheel from winter harshness, most people downsize winter tires to reduce the costs of the winter tire itself. There is also more chance of hitting potholes in early spring when they develop, the bigger sidewall helps protects the wheel against that.

I would hate having to mount and balance the tires twice a year, let alone pay for it. That's the main reason I put all-seasons on my "summer" wheels and dedicated winters on my OEMs. Now I just swap wheels in my own garage and that's it.

On my old ride, I swapped winter tires for 8 years. I didn't mind at the time and sometimes liked the "winter" look better; thanks to cheap OE wheels. 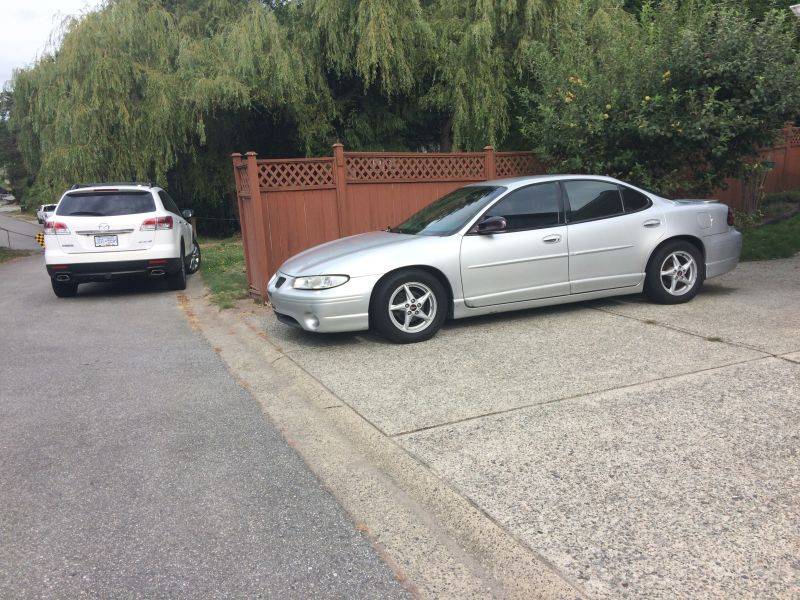 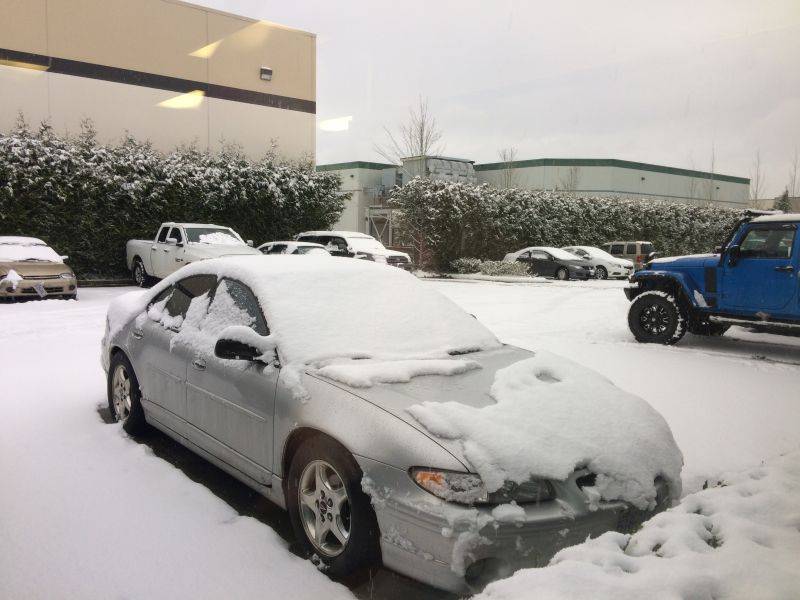 When I got the CX-9, I was tired of swapping rubber (health issues), so I went with an All Weather tire. This will be the third winter and I have no regrets on that decision. 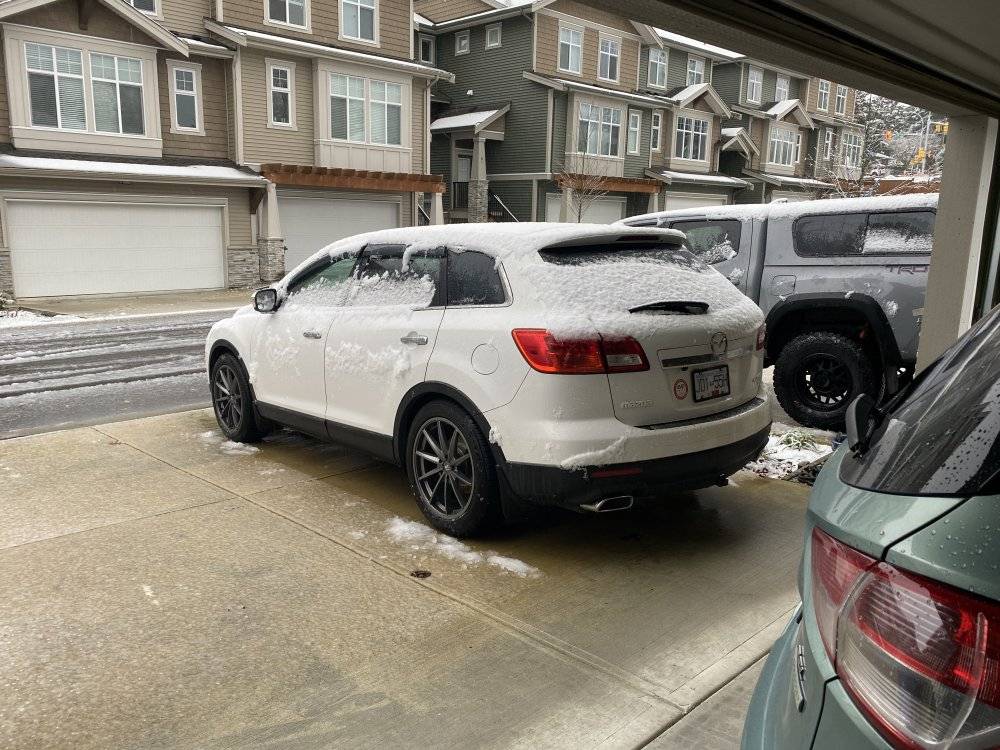 I’ve had luck with 3PMSF rated tires for year round. Usually get about 50k miles out of them since they have a compromised rubber composition, but I get to avoid the headache of swapping tires or wheels and tires twice a year
B

The CX-9 is a very big and sporty looking vehicle, and even the stock 20’s looked too small and too far inset for my taste. Add to that, the fact that I wanted winter tires on separate rims, so I put some winters on the stock 20’s and got a set of 22’s. Totally transformed the look of the car, and as Sm1ke already mentioned, my 22” setup is lighter than the stock 20” setup! Win, win!

My ride quality is very similar stock, but only because I went with a good light weight wheel with good quality tires. If you go with a cheap/heavy wheel with cheaper tires you would almost certainly notice a significant degradation in ride quality/performance. Wheels and tires are very much “you get what you pay for” IMO.
M

So what do you drive? What colour? And what colour wheels would you go with?
M

I found someone with the OEM 20s that is an hour away from me. I am thinking of using those as my winters instead and selling the 18s I have. Or maybe I end up using those as my regular wheels if I don't pull the trigger on the 22s.

In the ad it says wheels only, no TPMS. I basically know nothing about tire pressure monitoring system other than what it's for.

So basically, there's the TPMS inside each wheel that is connected to the valve stem, yes? But in this case, the guy who has upgraded his wheels has removed them from the stock 20s and put in his new wheels? Or am I way off here?

I googled mazda 2017 cx9 tpms sensor for sale and I don't see any for this model and year. I see links to other years or models. What would be the solution to this? Anyone know where I can get them and is as simple as screwing them on inside the wheel?
Last edited: Oct 5, 2021
Y

The tpms sensor were only added to the 2nd gen CX-9 from 2018 model and up. If i understand correctly from 2016 to 2017 it used the abs sensor instead of a dedicated tpms sensor in the wheels to report tire pressure. The good news is that mean you probably don’t need to install TPMS sensors if you have a 2017.

With new wheels installed, use the tpms initialization procedure:

Thanks man. This is a good place to start. I will look further into it. He took these wheels off of a 2021.

Yeah it's likely that he took the OEM sensors off the wheels so he could use them on the replacements.
Y

Good news is your TPMS system probably don’t need the sensors to work. I have a 2018 and i need tpms sensor. It is easy to tell the difference because i don’t have that TPMS reset button on the dash that you likely have.

That being said, i run my winter wheels without TPMS sensors anyway, i get the tpms malfunctions notice in the dash but it is easily ignored and not very annoying.

Get the wheels. You don’t need the sensors on your vehicle. Seller does. You can put rubber stems in for a couple bucks and mount your tires
M

Thanks all. I had to get this info so I could communicate with him as early as possible. I then left a message with the dealership today to confirm and they called me back later to basically reiterate what you guys said.
M

In case someone in the future is in my situation regarding an upgrade to 20s and they live in the Toronto area or wherever. I picked up my vehicle in mid-August. For several weeks I looked on kijiji and FB Marketplace for OEM 20s and it was hard to find. I did post a wanted ad and someone contacted me during that timeframe and was willing to sell his in October after he changed to these, which you can get on mazdashop.ca for $1,359 CAD plus tax (MAZDA M012 ALLOY WHEEL (MATTE GUNMETAL) - 16"/17"/18"/20"): 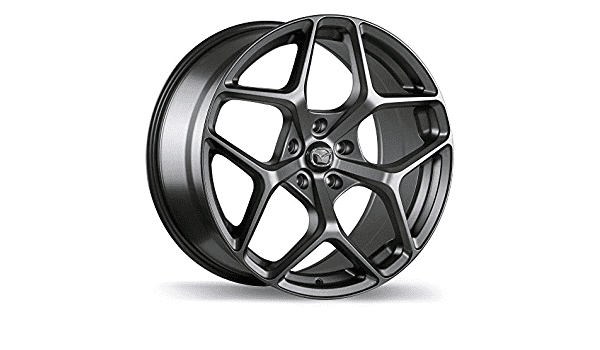 That fell through as he decided to keep his OEMs for winter.

I later saw on my kijiji email notification someone post the OEMs for $600. That email came at 9:30 am and the page already had 63 views. I emailed they guy and he said already sold.

This week someone posted them for $800, which came from a 2021. He also switched to the wheels posted above. I was able to procure the OEMs from him. And good thing I didn't have to drive the hour to his house as he was doing a job half way between us so I met him at that site and did the transaction there.

I also posted on the Toronto Mazda FB group and on Marketplace an ad asking if someone wanted to swap their 20s for my 18s (both with tires) in case they prefer the softer ride on the 18s. I also adjusted my wanted ad on kijiji asking if anyone wanted to swap. One guy actually replied to that saying his wife wanted the 18s and he was willing to swap his 20s on the rims shown above, but then next day he backed out.

So there are options, but got to put a little work into and be patient. And some good info above about the TPMS scenario.

I will actually be keeping my 18s on for the winter as we won't be doing much driving and I don't live in a place with crazy amount of snow. And if snow is going to accumulate, we just won't go out. This will buy time until I decide if I want to do the 22s or not in the spring and decide what to do with these 20s.

Edit: And now on Oct. 13th someone has posted brand new 20s for $1,000 that are a 20 minute drive from me. Their ad says they bought a 2021 and immediately swapped out for some black aftermarkets.

And finally, a few days ago someone posted some nice 22s with the right bolt pattern and centre bore not too small with 40 profile tires, all in good condition (all seasons used only two years), about an hour from me for $1,500. But dammit, they're matte black and I'd have to paint, and the style is a little too different than what I'd like (pics below). They came off a Pilot. And someone 45 minutes away from me posted Vossens with a style I like (similar to the Aussie fella's car that Mike posted a pic of), with tires, for $1,200, but 35 profile tires.

Edit: Mid November someone 15 minutes from me posted the 20" OEM with almost brand new Bridgestone Blizzak winters on them for $2,000. I told him I still think that's pretty good value as both things are basically new and come with the TPMS. I said, if you need a quick sale and come down in price, let me know as I'd be interested. He said okay. I told him that I found 18" used winters with 10/32" tread as well that I was going to go look at for $250 in case I want to put them on my 18s but to still keep me in mind. I literally went out to run an errand and then buy those 18s and I come back and dude changed the price to $1,400 and it said SOLD. I was actually going to offer him $1,750 for everything and then sell my 18s for maybe $500 (post on this forum first) and then re-sell those 18s for more than the $250 I picked them up for.

Nice! I'm liking the 22's but the clearance though

Any vibration issues while driving on highway speeds?
Please log in or register to reply here.