If your steering wheel like many of ours has become worn, leather ripped, and you're thinking of replacing it with a standard steering wheel that is very easily found in junkyards, you may find it more difficult to find a wheel without the cruise control buttons, as most of the later Protege sedans that come with a black 3-spoke wheel seem to have also came with cruise (the more base models I've noticed are usually a grey or tan interior) and all P5s came standard with it.

Well, instead of scouring for a non-cruise black steering wheel in good condition, leaving the buttons there and useless, or removing them and having a hole in the side, you can add some luxury and use them as audio controls instead.

To do this, you will need to have an aftermarket deck that supports wired steering wheel control (SWC) input, as well as a PAC SWI-RC module (US: https://www.amazon.com/dp/ (commissions earned), Sonic Electronix Canada: Amazon). The clock springs on these later Proteges all seem to be the same, and MP3/MSPs without cruise still have the correct clock spring and wiring to be able to use the cruise buttons.

Remove the 3 Philips screws on the bottom of the steering wheel cover and separate the two halves which are held in by clips. Be careful not to snap off the plastic part that holds the bulb for the key hole light. On the bottom of the clock spring we will be using the 4-pin white plug next to the yellow plug. If you have an MP3/MSP the factory alarm will have a T-harness connected to it, the wire colors on the T-harness are the same so tap into them where ever along the harness you see fit. 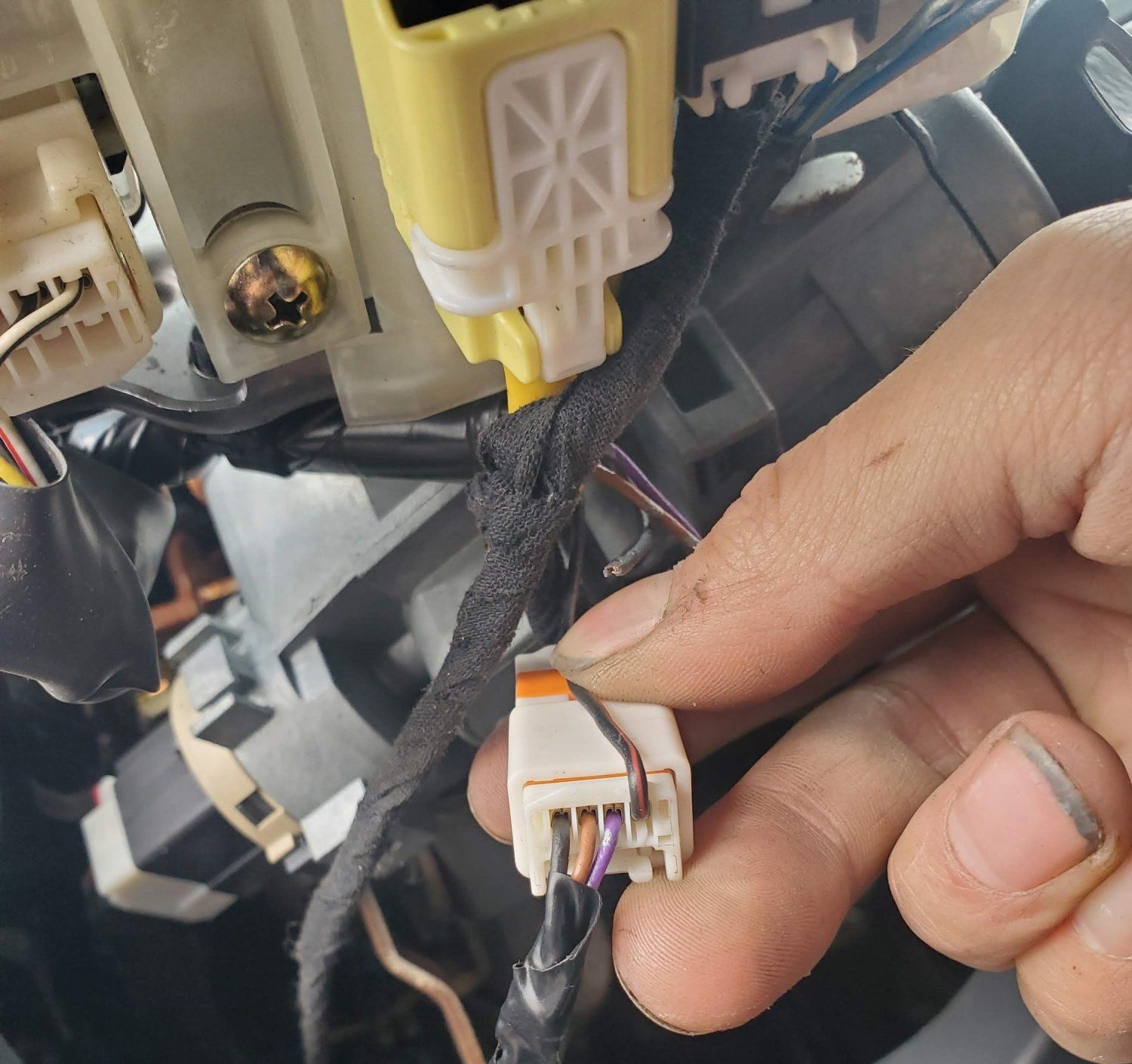 The brown wire on the 4-pin clock spring harness is a ground signal with the cruise MAIN switch on the side in the ON position. You could use this to activate a relay to do something cool, or if you want to add it as another button for audio controls (keep in mind you'll have to double-press it as it is latching or not press it in all the way) connect it to the white/black wire from the SWI-RC.

On JVC and Kenwood, connect the blue/yellow wire from the SWI-RC to the same color wire from the radio harness. On most other brands (Pioneer, Alpine, etc.) connect the 3.5mm jack to the appropriate plug on the back of the deck, usually labelled RC or REM.

Programming the SWI-RC
If you prefer to read the original manufacturers instructions you can go by the included guide or download it here.

1. BEFORE powering up for the first time, use a small flathead screwdriver to rotate the dial on the side of the module according to your radio. See the chart below for "Switch position" relative to brand.

2. Hold down the programming button on the side of the SWI while turning the key to the accessory position. The light on the top of the module will light up red, let go of the button, and it will go out. Then press the button three times. Every press the light will flash to confirm. After three presses turn the key off.

3. Turn the key back to accessory. The red light will blink three times. Press the programming button until the light comes on then let go, and it should stay on solid. You will then program each button to what you want it to do, in the order shown in this chart dependent on your stereo brand. The first will be volume up, press and HOLD the button you wish to use (presumably the top one) until you see the red light go out, then let go, and it will come back again to wait for the next function to have a button assigned.

Because there are only 3/4 buttons, most functions will need to be skipped. To skip a function, press the programming button once.

Once you have gotten to the end of the list, the red light will go out, and it is ready for use. Test the functions of the buttons to make sure they work properly, then reassemble your radio and steering column cover.
Please log in or register to reply here.