I used a device that plugs into the OBD2 port and connects to another 12 volt source to provide power to maintain all the car's memory settings while the battery is out. I ran jumper cables to the other car in the garage. $10 & up for the gizmo. I used a battery carrying strap to lift the OE battery out of the car. $7. The nuts on the battery cables are all 10 mm. I had to gently pry the positive cable clamp a bit wider open to get it off the battery post.

The original battery sits in a light plastic "box" that covers the 4 sides, but not the bottom. It's a fairly tight fit, and can come out when you lift the battery out. I'm not sure what purpose this box serves. Anyway, it is tight where the new battery has its built in handle and the extensions of the case for the handle. I got it all jammed into place, but if I did it again I'd cut notches into this box to clear the handle. The plastic tray the battery sits on has 3 steel bolts in the bottom, and the heads showed some corrosion. I wire brushed them and sprayed them with Noco NCP2 battery terminal protective spray. A good alternative would be to place an acid-neutralizing battery mat under the battery.

It all works well, all the memories were preserved, and I have full confidence that on a ski trip with powder snow billowing the car will start the first thing in the morning and get me to the ski hill.

Thanks for the info, I was just thinking of replacing my 2016's battery.

I replaced the OE battery in my ‘16 about three years ago. It stranded us when we went out for breakfast one morning. I thought that came about pretty early for a car that was garaged at night and only parked outside when my wife worked. I probably jumped the gun on the replacement but with a 2 year old and then pregnant wife getting stranded again in the NH winter wasn’t something I was interested in. I believe I went with a Sam’s Club Duracell replacement.

PTguy said:
The original battery sits in a light plastic "box" that covers the 4 sides, but not the bottom. It's a fairly tight fit, and can come out when you lift the battery out. I'm not sure what purpose this box serves.
Click to expand...

I think its a heat shield.
P

Mazdiod2 said:
I think its a heat shield.
Click to expand...

Good point. It is kind'a like corrugated plastic-cardboard, and would work as a heat shield.

So which battery did you choose? I got a Mazda “High-Performance” Group 35 battery for my 2016 CX-5 in October last year. The OEM battery sold by US Mazda dealers is made by Interstate.

Have you ever add any distilled water into the battery cells? 5½ years are pretty long service life for a car battery. My stock Panasonic battery lasted about the same 5½ years but I added some distilled water in between. And the final year was dragging and eventually it died.

BTW, I didn’t use any memory saver while changing the battery. I lost only the trip odometers, and did a reset to driver side one-touch open / close power window. Of course YMMV.
P

Interstate is a marketer, not a manufacturer. I got the Costco Interstate. I think the only difference from the usual Interstate is that the warranty is serviced by Costco, not by Interstate. From the appearance the Interstate auto batteries look to be made by Clarios, formerly Johnson Controls. Yes, I check the electrolyte level a couple of times a year and add distilled water up to the indicators when needed. If the cells have caps (ours do) then the levels need to be checked and the batteries watered as needed. During the recharging cycle the water in the dilute sulfuric acid electrolyte is electrolyzed into hydrogen and oxygen gases. These gases leave the battery cells through the vent caps. This must be replaced with distilled or deionized water. Tap water in many regions contains to much mineral and will damage the battery.

On Saturday, we went to a friend's place, and the car sat in -20c temps for 5 hours. The OEM battery didn't have enough juice to start the car, and I had to boost it with the battery pack I keep in the trunk.

Yesterday, I picked up a Costco Group 35 and installed it. Very happy with it so far. It was $120 CAD. I was going to post a DIY but there's plenty of info here already, so I'll just add a couple of pictures and a few notes for good measure and add a link to this thread to our Resources.

To get the black terminal cover off the positive terminal, flip the cover off of the terminal, then squeeze the retaining clip in and lift the whole cover up while pulling towards you. 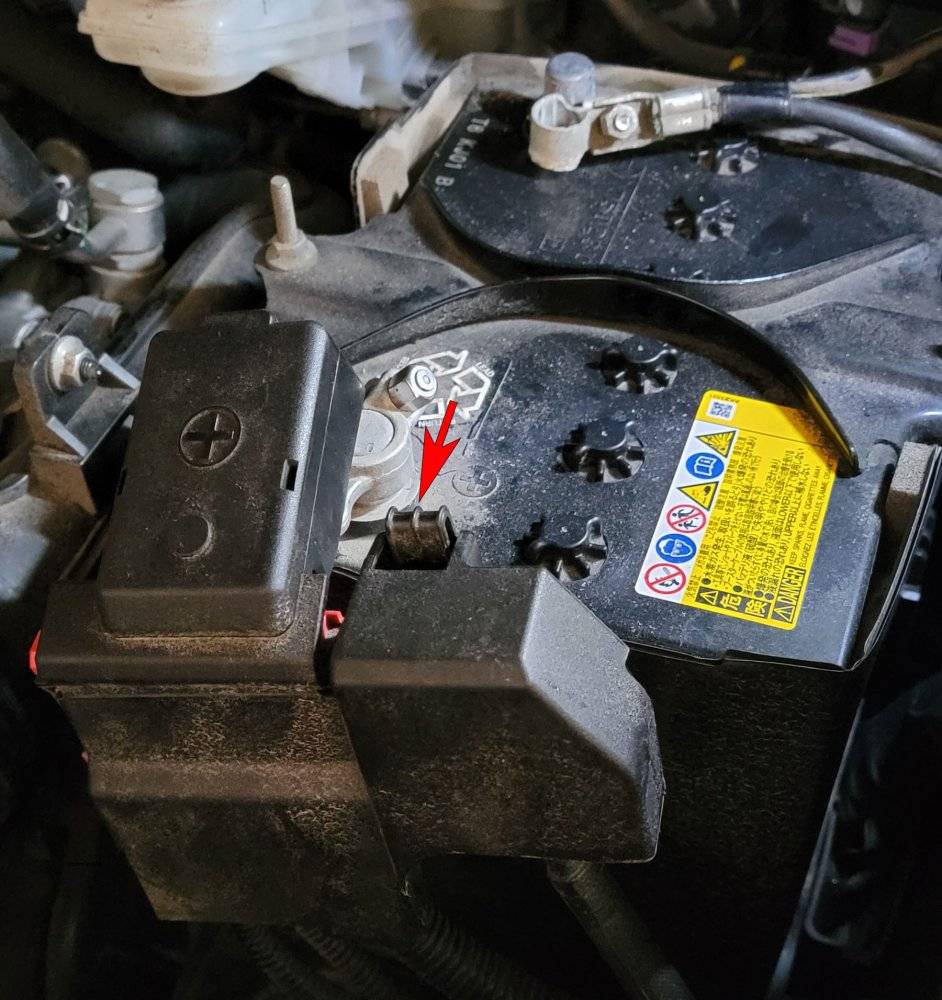 This may not be necessary for everyone, but for me, the clamp wouldn't come off the positive post after loosening the 10mm nut. I used a 12mm socket to remove the nut that holds the red bracket to the terminal clamp, then lifted the bracket off the clamp and wedged it under the air intake piping. With the red bracket out of the way, I was able to twist the clamp back and forth until it came off. 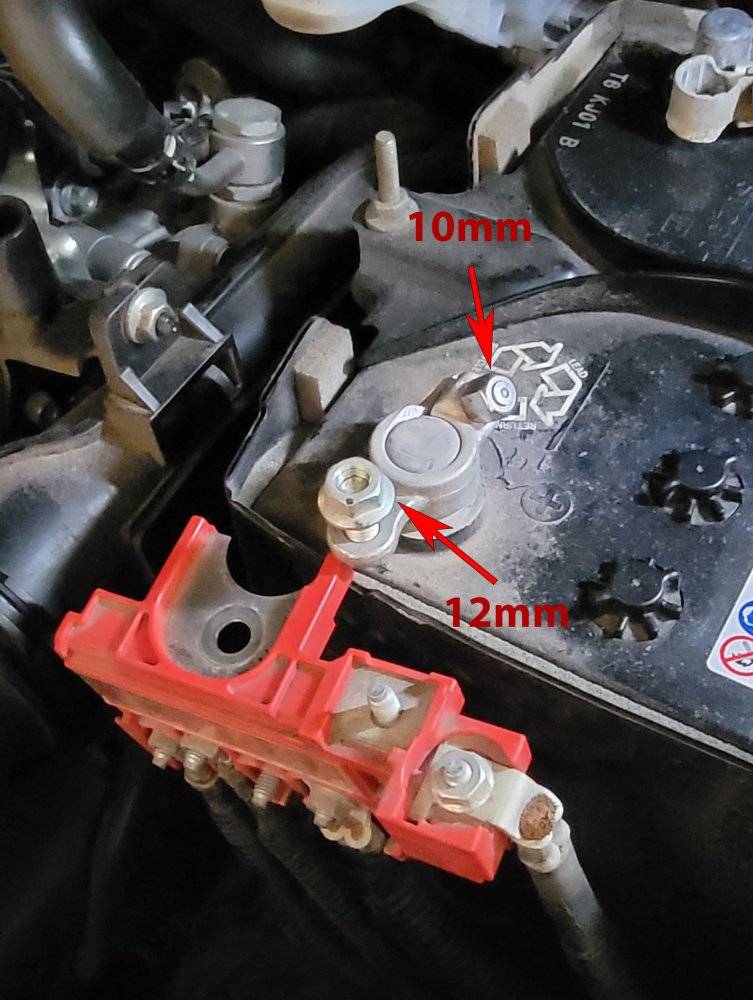 And finally, because the OEM battery doesn't have a handle (as far as I can tell), I lifted the battery out by removing the battery tie down and pushing the battery "back" (towards the driver's seat) as far as it would go. That gave me enough room to wedge my left hand underneath the positive side and tilt it up towards me a bit. Then I used my right hand to grip the handle of the battery box on the negative side and lift box and battery out.

I didn't lose my radio presets or vehicle settings, including liftgate height. I lost my trip odometers, and I did have to reinitialize the one touch open/close window function though. From the driver's door switch panel, roll the window down all the way, then pull the switch up and hold it to close the window. Hold the switch up for a couple of seconds after the window is closed. Repeat for each window.
Last edited: Dec 20, 2021
Please log in or register to reply here.