So coming home from 4th of July with my in-laws we got rear ended on the highway. After weeks of playing hide and seek with my insurance co. (Absolutely not our normal experience) the other driver’s insurance accepted all fault. Dropped the car off on Friday, and then not a peep out of them. Called the body shop yesterday and they said they sent in their estimate Friday night….. so geico has been not-approving repairs for nearly a week now.
The estimate was for a little over $3000. There damage to the quarter panel under the bumper cover, and the gap with the sliding door is off. It also blew the left strut mount. Sort of wondering at this point if they’re just going to total it out. 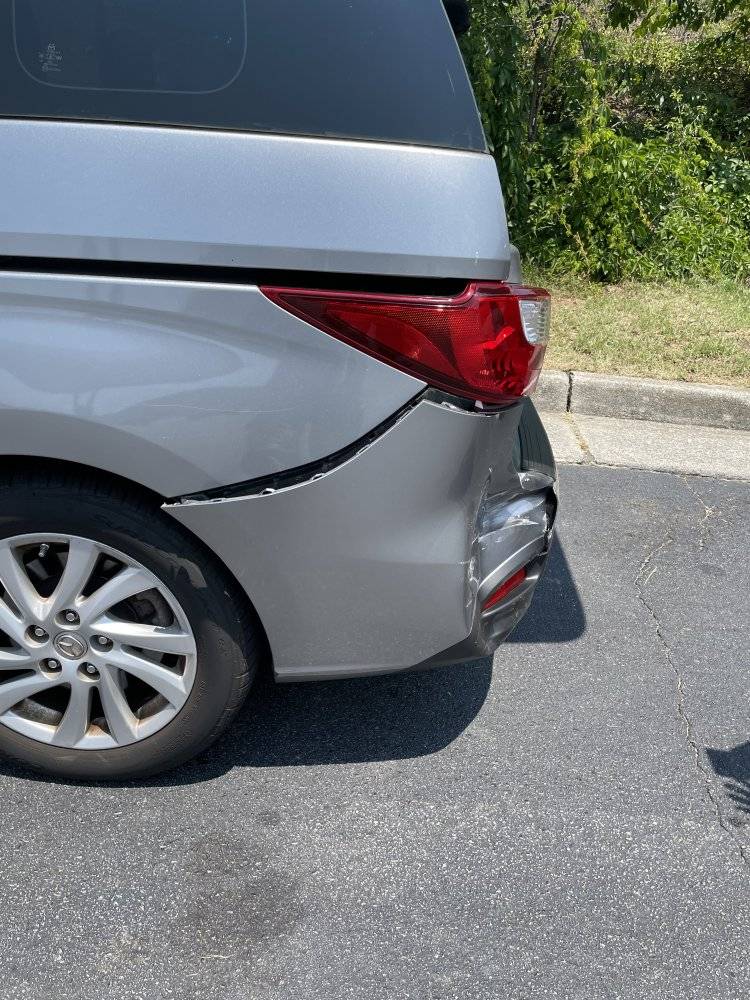 Car is worth $6k easy, even if we go by pre-covid prices. $3k shouldn't total it but it might be close.

I would call Geico and demand to know what's happing. Usually they want to send an adjuster out ASAP, cut a check ASAP and be done with it.

You can play a little hard ball with them (threaten to call the State Insurance Commissioner, hire a lawyer), but this is a small accident and cut and dry and it's pointless for them to drag their feet. Did they send an adjuster out?

Your own insurance company doesn't really need to get involved since Geico is accepting fault. That may be why they were playing a bit of a waiting game with you if you told them you had a claim into Geico.

However, if Geico isn't coming through, you can put a claim in with yours...you will pay the deductible and then your insurance will chase Geico for reimbursement.

I hate doing that because now you have a claim attached to your policy where it's not supposed to be.
T

My 2010 Mazda 5 got totalled by a distracted driver in Feb., 2020 (right before covid). His AAA auto club insurance accepted all fault and the process went through pretty quickly. They also paid for the car rental for a week for me to look for my current 2015 Mazda 5.

There is no reason to get your insurance involved and if you do, it won't be good for your record and future insurance premium rate. Send the reminder email to the other party's insurance company. No threatening, just once a week to once a day reminder to let them know you are waiting for them to do their job. If they need something, like police report, share it with them. I personally get the policy report at the police station and emailed a copy to the other party's claim agent so they don't have excuse to delay the process.
I

Update on this. After a week Geico finally decided to approve the repairs to the car and the body shop got started. The quarter panel in by the jack was crushed inwards, it broke some of the welds between the panels As well as some of the plastic interior pieces. Not sure if they’re able to pull that out or if the whole panel is being replaced. When I last spoke with the body shop their suspension person hadn’t been in, so they hadn’t pulled apart the strut at all. They said they were going to finish the other repairs, and then put it on the rack and do the suspension stuff afterwards. They did pull the front bumper cover off to check for any other damage because the impact popped the cover loose.

As to the insurance stuff. Normally I prefer to just go through my own insurance, pay my deductible, then have them go after the other company through subrogation to get repaid. The reason for that is I have an established relationship with them, and it generally gets done much faster. Now this particular case was not my normal experience where it took a week to get my assigned adjuster on the phone. It took long enough that the other company had time to decide they were covering it. I’ve been with that company for 20 years, and have small and large accident forgiveness…. So no concern at all with it upping my rates for the future.

Geico is paying for my rental through 8/3 (estimated date for the Mazda to be ready), though if it goes over I’ll be calling them and telling them to keep paying. The originally tried reserving me a fusion… which I had one as a rental a few months ago and was a nice car. This time around enterprise asked what was replaced, and when I said a van they offered to bump me to something which can hold more people. I had a 4-runner for a week, then swapped it in for a caravan since it does a much better job of actually holding people in more than 4 seats.
I

Ugh, update to my update. I am not happy.

Body shop called me beginning of last week to say the body work was all complete, but they were waiting on two parts which were on back order. One is the exhaust heat shield around the middle of the car. The other is the plastic rear bumper step plate. Neither of those is a critical item, so they were saying “hey if they aren‘t in by Friday we’ll have you pick up the car and then call you in a couple of weeks when they come in”. I’m actually okay with that.

What I’m not cool with is they said they determined the popping/clunking noise from the front end was the fault of a worn suspension, specifically they noted play in the front/rear sway bars, and in the right side swaybar end link. This was determined by a 2 mile test drive, and a brief inspection and grabbing/pulling on things with it on a lift. I respectfully requested they open the hood, bounce the front end and watch the mount move inside the strut tower with their eyes…. A step they had not taken. Regardless of that Geico (other person’s insurance) denied the repair stating: 1) the suspension components were worn and likely why they were broken, 2) this wasn’t part of the initial damage estimate, and because it was a supplemental add on they concluded it was just there and unrelated (their suspension tech wasn’t there that week), 3) a front suspension component is unlikely to break during a rear collision.

I called both the body shop and Geico to try and get this resolved before picking up the vehicle. I informed them the front suspension was about a year old with only ~10,000 miles on it. I informed them the noise started immediately after the impact. I informed them other work had been done on the front end a month earlier (control arms-original and worn, and right strut mount-damaged in a pothole) and the mechanic specifically checked the driver’s mount at that time and it was solid; I am a little irked with my mechanic because I purchased and provided FSB bushings for them to replace, but they didn’t because the strut mount was broken so that was likely the culprit of the noise. I informed them “unlikely” does not equal “impossible”. I informed them I was impacted after a rapid stop from highway speeds, and the front suspension was completely loaded at the time of the impact (meaning there was no give in it like normal), and there was enough force to dislodge the front bumper cover. Their only response was to take it to a Mazda dealer for a diagnostic, and if their technician agreed it was because of the impact. They said I could submit findings from my mechanic, but they’d go with whatever statement the Mazda diagnostic gave them.

Currently trying to contact my insurance company again and reactivating the original claim. I don’t care if they just go argue with Geico and compel them to do the repair at their cost, or if I have progressive do the repair and go after Geico to collect my deductible through subrogation.
Please log in or register to reply here.