Long Story: I had the shop replaced both my front wheel bearings for the first time 5 months ago at 153k miles. Everything was fine till 1 month ago. Half-way home from a 250 mile trip, I notice a strange constant low hum. I initially thought it was a bad install/malfunction of the new front wheel bearings replacement (TIMKEN brand - I heard they are great bearings in terms of performance and cost).

During troubleshooting, I couldn't isolate where the noise was coming from (front or rear) while sitting in the driver's seat. Also the noise only presented itself when going above 35mph and increase slightly in decibel as you go faster (like having big 4x4 tires on). Getting up to freeway speed and putting the transmission in neutral (or revving the engine) didn't alter the noise. I check for cupped tires and rotated my tires to make sure it wasn't noise from bad tires. Spinning the rear tire by hand, I couldn't isolate the issue either. Last, I checked to make sure my exhaust/muffler didn't have a hole in it or loose connections too.

I then found a TSB on CX-9 bad rear wheel hub bearing http://am.mazdaserviceinfo.com/mazdaesi/index?page=detail_pagelet&id=TSB672&actionPrint=print. With this TSB in mind, I was able to isolate that the humming noise was coming from the rear by having my brother drive the car while I sat in the third row seat and putting my ears next to each of the wheel wells listening. The hum was faint but I was able to guess that I likely had a bad right wheel hub bearing.

So with 161K miles on the odometer, I decided it's about time I order two new rear wheel hubs (TIMKEN HA590041) from rockauto.com and proceed with the removal and replacement of the old ones.

Summary:
1. Make sure emergency brake is 'on'

2. Jack up and remove 'bad' rear wheel (be safe and use jack and multiple jack stands, spare tire, etc for support!!)

3. Undo the two phillips screws holding the rear rotor to the rear wheel hub (red arrows). These screws won't be needed with the new wheel hub as they don't come with any holes to accommodate the screws. 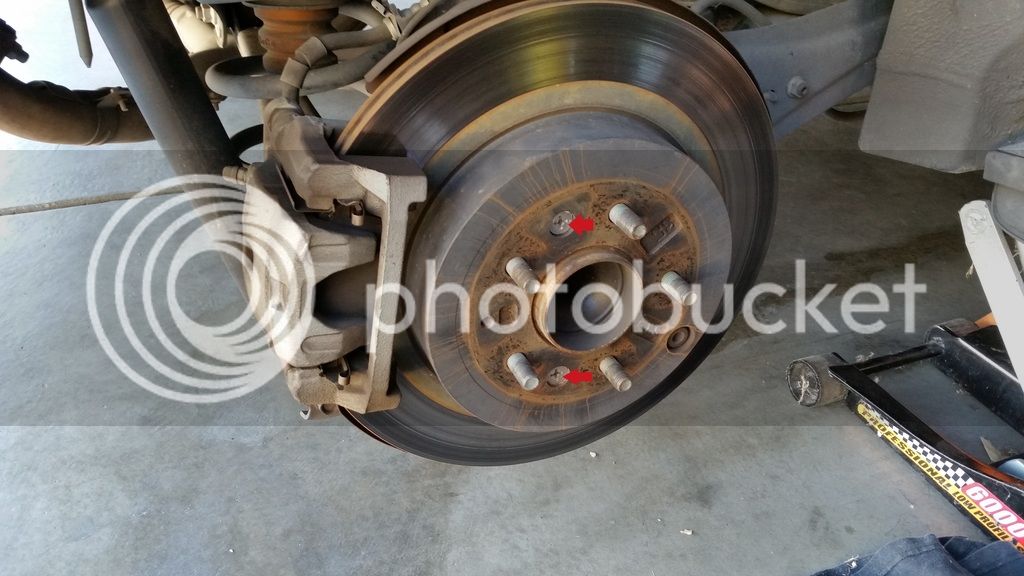 4. Undo the two 17mm brake caliper screws on the back of the rear brake caplipers (red arrows). Once the screws are removed, flip the caliper to the top of the rotor and zip-tie it up and out of the way. 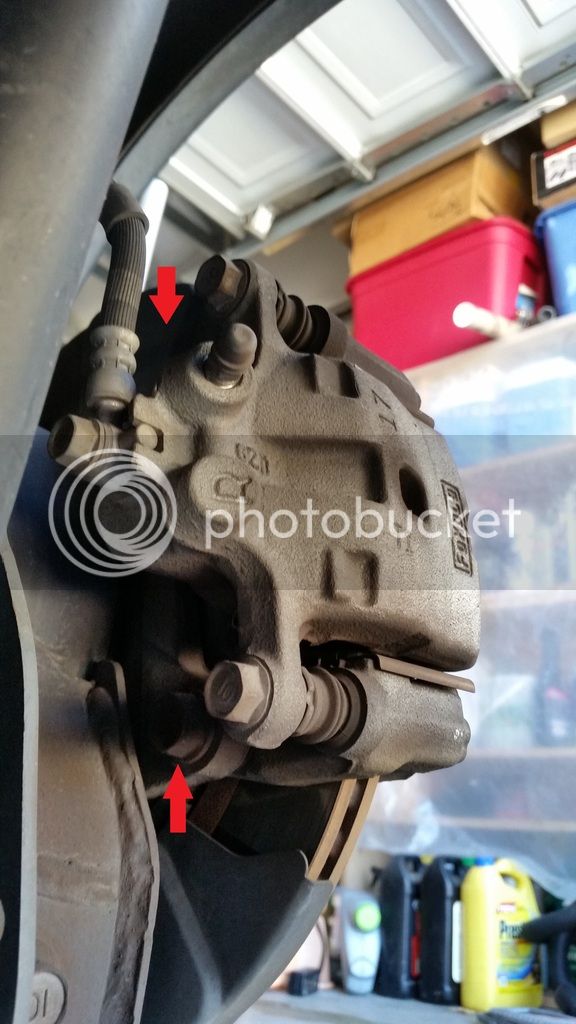 5. Make sure emergency brake is 'off'

6. Now you can try and shake the rotor off the wheel hub and remove it. If it doesn't come off easily because of rust build up/e-brake groove lining/etc, you can try various methods to try and break it free from the hub, such as using a rubber mallet to the rotor, removing rubber grommet on the rotor and putting flat head screwdriver into the hole to contract ebrake drum, spray PB Blaster and let it soak, etc. Mines was stuck to the wheel hub with rust. But useful trick I found from my tool chest that worked for me was using an 8" inch gear puller to pry the rotor from the hub. With a couple of turn of the gear puller, it help "snap" the rust bond and the rotor separated from the wheel hub. 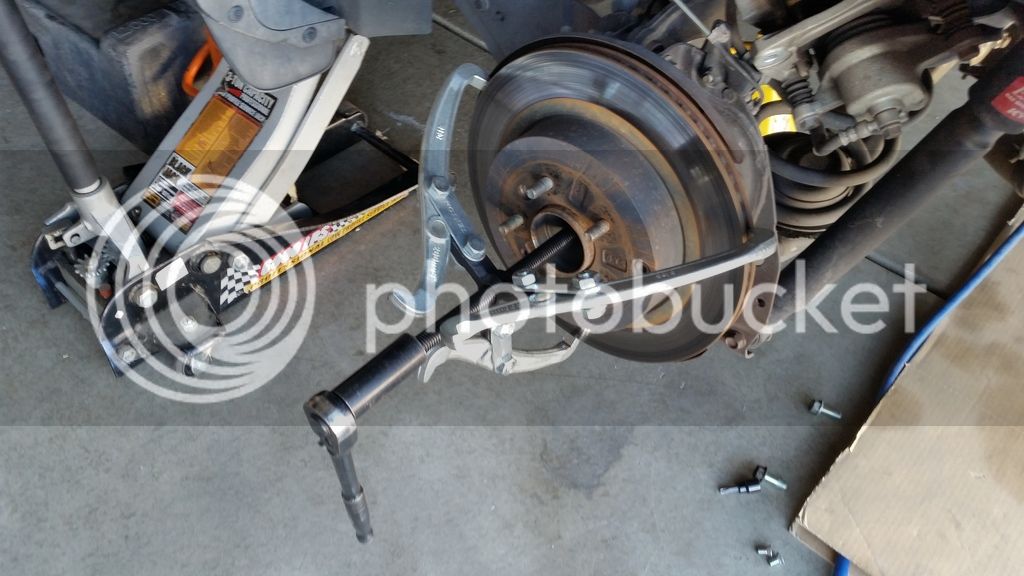 7. Spin the wheel hub to see if you can hear the bearings inside the hub 'crunching' or feeling loose. My right felt crunchy when rotating (instead of smooth) and I was for sure this was the cause of the low noise hum.

8. Undo the rear abs sensor wire with a 10mm socket and move it out of the way of the wheel hub.

9. Using a "long" Torx 55 on a ratchet with extensions (when needed) along with a DIY 12" breaker bar (when needed), reach into the back of the hub to remove the 4 torx bolts. You can remove the 4 bolt by positioning yourself underneath the car or by kneeling from underneath the wheel wheel (both worked for me). **Hint - Have the new wheel hub near you. Remove bottom 2 torx bolts first and 1 top bolt. While removing the last top 1 bolt slowly out, simultaneously hold the back plate. Once the old hub is off, put on new hub on (while still holding the back plate) right away and screw back in with the 1 bolt. This way, the back plate with the ebrake won't fall off/left hanging when you remove all four bolts. 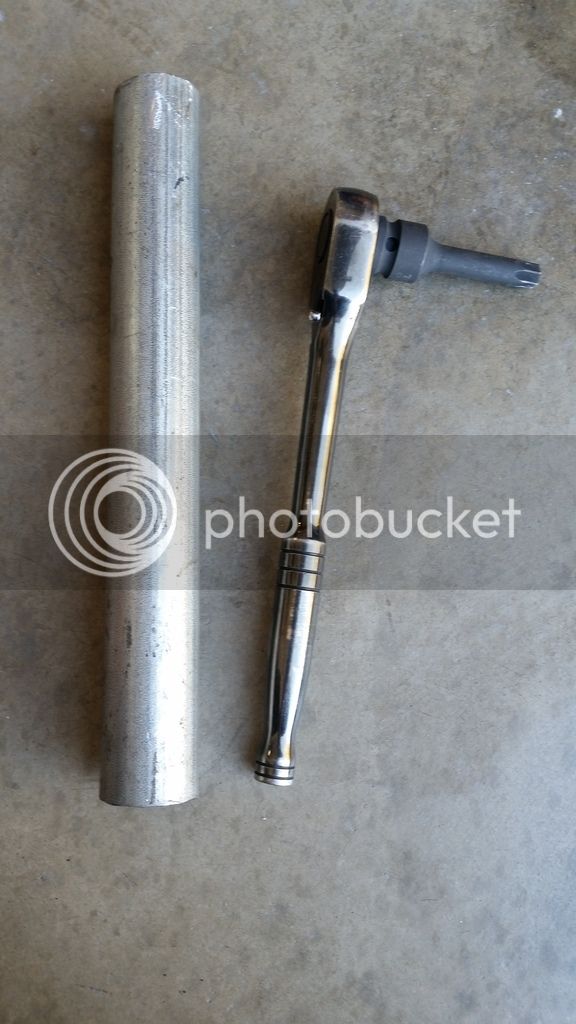 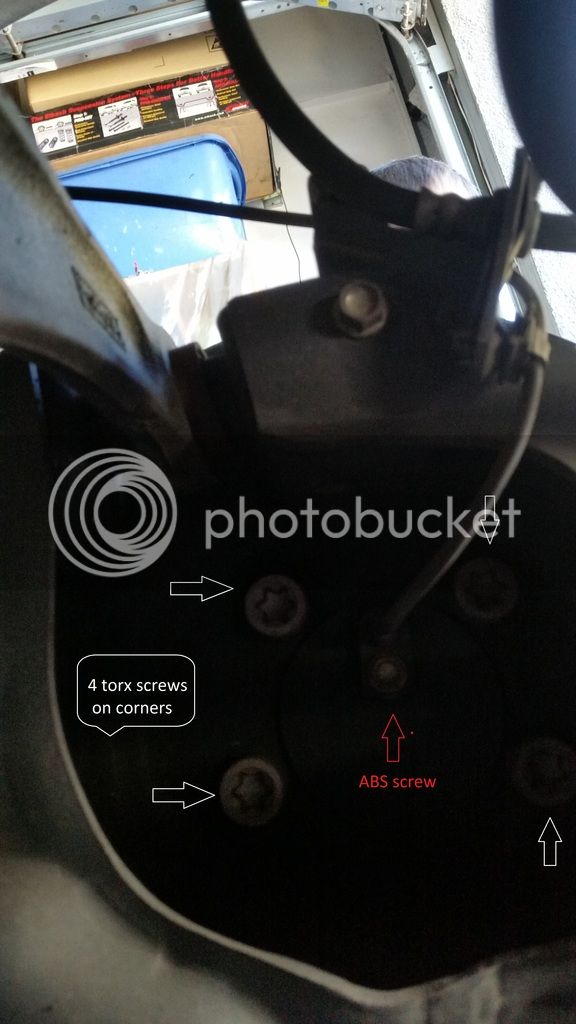 Reverse most of the steps above to reinstall.

Thoughts:
I believed that the step of removing the wheel hub from the car would be the toughest part of this DIY, but I guess with the car being in Southern California (no snow/rain/salt/minimal rust), the 4 torx bolt along with the hub came off easily.

Overall, I give this job a 2 out of 10 for difficulty. If you can change brake pads/rotors - you can do this. It might have been more difficult/time consuming if I didn't have the proper tools and had issue removing the rotor/nuts/bolts (YMMV). Took only 30 minutes on the second wheel hub after I learned from trial and error on the first. The hardest was trying to find a way to initially remove the stuck rotor from the hub. I've heard of others who had issues with seize torx bolts that couldn't be removed and had to be taken to a shop for assistance. Also, keep in mind that FWD CX-9 do not have rear axle nut to remove like their AWD counterpart. 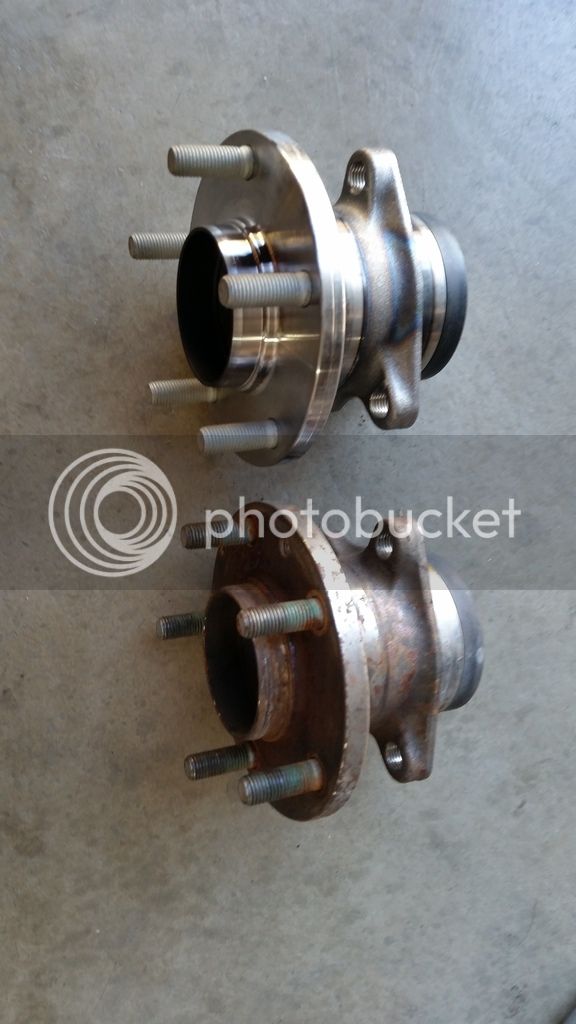 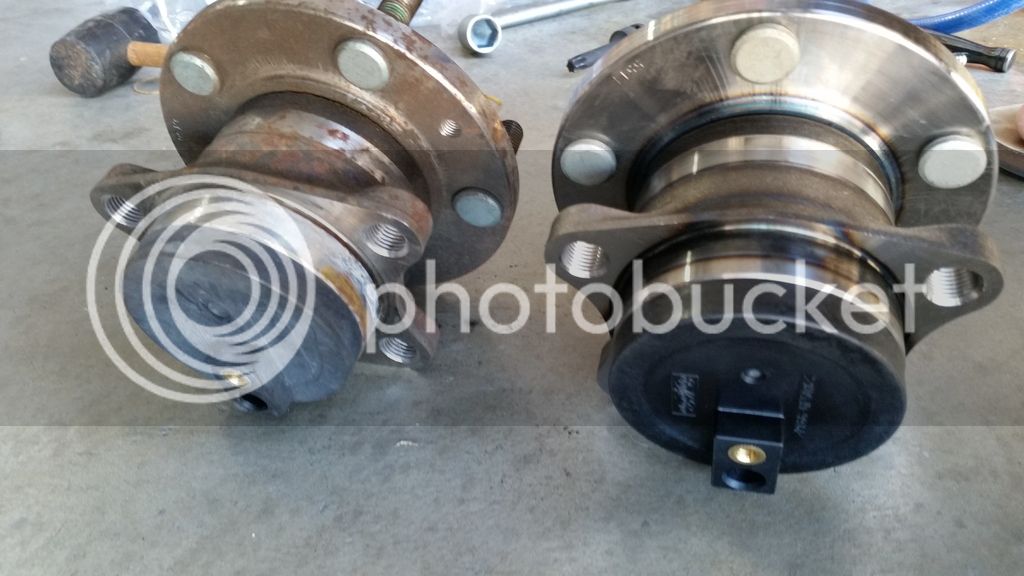 Torx screw i bought from amazon.com is in the description of the youtube video below. Thanks to him as his video helped out with understanding what this DIY project entails (esp the e-brake removal). It also was applicable to 90% of this DIY. **Note - his instructions are for a 2010 AWD CX-9.

In the end, the DIY replacement of the rear wheel hubs resolved my low hum noise and saved me 1/3 to 1/2 the money I would of spent at a repair shop.
S

Thanks so much for the write-up, it was really helpful this weekend when I tackled my wife’s 08 CX9 right rear bearing.

I ran into much more rust than you and had to use a harbor freight 12 ton puller to get the bearing hub off the axle. I was planning to use a harbor freight 8" puller, but it wasn't strong enough to pull back the hub, resulting in the tool's bolt stripping. Normally the 12 ton puller is too big, but I unscrewed the pointy cone thing off the piston plunger and used a 70 torx bit in place of the cone to make the hydrolic plunger longer.

I bought a torx set off Harbor freight to get a torx 60 and torx 55 bit, thinking I would likely need the torx 60 to initially loosen the bolts without stripping them, given the amount of rust I was expecting to encounter. However there was no way the harbor freight torx 60 would fit past the ABS ring. With further research, I found out snap on makes a torx 60 specific to this situation, but did not want to wait for the bit to come in:

Instead, I sprayed the heck out of both sides of the bolt with PB blaster and let them soak for 4 hours. I then was able to remove all 4 bolts using the torx 55 without stripping the bolt. Assembly was pretty straight forward.
Last edited: Jul 20, 2020

Administrator
Thanks as well...Posted a link to this thread in our new Resources section...

Would you know if this procedure will give enough space to remove the rear cv axle? I figured I can replace since it's along the way. Any help is appreciated!

D
2013~2016 Does anyone know the rotor bolt thread size for rotor removal?